Lunch with "The Fair Diana".

I had lunch today, poolside,  at the Longboat Key Club in SRQ.

The Club is an "upscale" Resort.

The food was mediocre, to say the best.

For I had a lovely time with my dear friend Diana E. She is the wife of another good friend the Revd. Fred E. (onetime Rector at St. James Church, Greenfield, MA).

Fred has already departed from SRQ to their summer home on the island of North Haven (ME), in the Penobscot Bay.

Diana has lingered in FL,  so that she can enjoy the spring time warmth in SRQ for a wee bit longer.

Diana (I call her "The Fair Diana") and I miss Fred.

Nevertheless we had a blessed and happy time over lunch today. 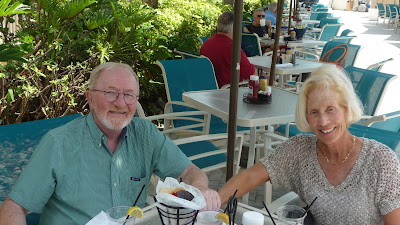 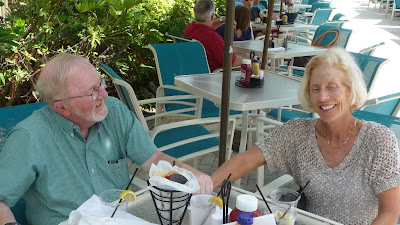 Bingeing on an author

I have been bingeing on the novels of Ian McEwan.

It all started when on April 18th 2015, at the New Books stack of Sarasota County's "Fruitville Library"  I picked out McEwan's 2014 novel "The Children Act".

It has to do with the effects of an Act of Parliament in Great Britain (The Children Act) and a High Court case involving a 17 (almost 18) year old boy, a Jehovah's Witness, and whether or not his parents could refuse a blood transfusion which could  save his life.

I was immediately hooked on McEwan's novels.

Since April 18th I have read

"The Comfort of Strangers"  1981 (a dark and somewhat gothic novel).

"Amsterdam" 1998  (three old friends meet at the burial of a woman who had been married to one of them, and the lover to two.  At the funeral they have an unpleasant encounter with the British Foreign Secretary.  But are they truly friends?  The plot thickens as it leads to a deadly encounter in Amsterdam).

On Chesil Beach" 2007 (The courtship and wedding of two shy and in-experienced lovers.) Their relationship falls apart on their honeymoon night at a Hotel near Chesil Beach. An annulment ensues.  If only one or the other of them had taken steps, or spoken words towards the other in a late night denouement on Chesil Beach).

"Sweet Tooth"  2012  (A student is seduced by her Professor: he is an MI 5 operative.  The seduction is a ploy, leading to her low level work in the vast bureaucracy which is MI 5 -  leading to a disastrous failure on her part.)

There's the "barebones", BUT

(1) McEwan's characters are not particularly interesting in and of themselves.  They are mostly English Middle-Class (or aspiring to Middle Class) people whose lives are un-exceptional, dull, boring; and driven by their own internal bureaucratic selves.

(2) McEwan, from a blue-collar background, has a deep understanding of the foibles, failures and frustrations of aspiring entrants into English Middle Class life.

(3)  Above all else McEwan does his research:

In The Children Act, he has an important understanding of the British (English?) High Court.

In Sweet Tooth, McEwan takes us into the world of MI5, in which no one can be trusted. and every colleague  must at the same time be welcomed as friend, or suspected as foe.
Posted by J. Michael Povey at Thursday, May 14, 2015 1 comment: Links to this post

Memory is so odd, and so very random. (Farley's Rusks)

Yesterday,  as I walked out,  for reasons which are beyond my ken, I began to think about "Farley's Rusks".

According to Wiki. "A rusk is a hard, dry biscuit or a twice-baked bread. It is sometimes used as a baby teething food"

The most famous brand of rusk in the U.K. was made by the Farley Company in Plymouth, Devonshire.

Since I have five younger siblings I am very familiar with Farley's Rusks.  They were all but omnipresent in our home.  As it says: "they were a baby teething food". There were five babies in our  home  after me (from 1950 - 1956), each of whom needed Farley's Rusks as they "teethed" and moved from breast or bottled milk to solid foods.

Lord alone knows if I cheated my younger sibs out of their fare shares of rusks, 'cause I liked them too. They were so tasty in warm milk, or smothered with butter.

QUESTION.  "What trick of memory made me remember "Farley's Rusks" yesterday morning?"

COMMENT.  The Farley Company was in due course "acquired" by the Heinz Corporation.  The Plymouth, U.K. bakery was closed by Heinz. Rusks were baked by Heinz "elsewhere".  The well-honed skills of  the Farley Companies' Plymouth Bakers  were accounted as nothing.

OR SO THEY SAY:

PLEASE ADD YOUR OWN "OR SO THEY SAY" TO THIS LIST.

Silence, a Hawk, and Lydia.


1.  I have kept silence for two days, fearful that I would say too much or too little about:

a.  The British General Election (disastrous from the point of view of this unrepentant "leftie").

b.  The fabulous novels of the English author Ian McEwan (I have just "discovered" him, and will no doubt wax critically eloquent about his books ere long- you have been warned!)

c.  The sad implosion of the Church I attend. (Maybe more about this later -  when the dust has settled).

I encountered three young lads  (maybe aged 13-15) who were fishing at the east end of the pond in Bill and Pat's "development".

They called me over.  These nice lads were beside themselves  because a Hawk had suddenly and dramatically dropped to the ground, right where they were fishing.

It was clear that the Hawk was badly injured.  The lads asked me what they should do to help the bird.

Fortunately I was carrying my mobile 'phone, into which I had entered  the "non-emergency"  Police Dept. 'phone number.  I suggested that if they called this number they might be enabled to get help from the Sarasota County Animal Services Dept.  It was the least and the best I could do.

3.  When all else fails, Lydia will never let me down.  I have watched this video so many times.  I never fails to make me laugh.