On Sep 11th 2001, I shared in the almost universal sense of shock and horror. It was a bad day, with bad deeds, done by bad people.

Within my sense of shock and horror I had a hope. It was that our people would observe "shiva" the Jewish ...period of mourning after a death. I had hoped that we would spend 8 days in grief before we faced the new reality.

Sadly the Presidential response encouraged us to go out shopping, and to take vengeance on Iraq before we had a chance to grieve and mourn.

This meant that the "White House et al" in 2001 never left space for grief.

There is a hole in the American soul, for our broken-heartedness was instantly politicized by the White House.

That's why I am so conflicted each Sep 11th.  And it’s why I am on my way to a Christian/Jewish/Muslim Prayer service at Sarasota’s First Presbyterian Church this evening.

Posted by J. Michael Povey at Saturday, September 11, 2010 No comments: Links to this post

On Wednesday I roasted four chicken legs.  (In fact the oven did the roasting).
I cut up the meat from two of the legs to make my famous curried chicken salad. (Well at least one person other than I like it - so it’s just a wee bit famous!).
That left two cold cooked chicken legs. Whenever I opened the fridge door they called out to me, saying “do something”   So I decided to “do” a chicken pot pie.
I chose the “quick and easy” recipe with cut up chicken, low fat cream of mushroom soup, frozen green peas, frozen black eyed peas, and a bit of cayenne pepper to spice things up – all to be covered with store bought pie crust.  I mixed up the ingredient in a plastic bowl, and set it aside for the peas to thaw.
By then I needed to run an errand.  I turned the oven on to pre-heat it, planning to transfer the mixture to a glass cooking bowl and cover it with the pastry as soon as I got home.
The errand took a while longer than I’d anticipated but when I arrived back home I was  greeted with the smell of something cooking.
Oh my! When I’d turned the oven on, I’d forgotten that I had previously placed the plastic bowl with its contents on an oven rack,  to keep it from the lips of prying cats.
By the time I got home the  plastic bowl had started to melt, and the food was cooking!
Unbelievably, none of the plastic had melted into the food, nor had any of the food spilled over.  It was perfectly edible, so my supper last night was chicken pot pie sans pastry!
But  I MUST PAY ATTENTION,  things could have been a lot worse.


I'll never again be able to use this battered old plastic bowl!

Posted by J. Michael Povey at Friday, September 10, 2010 No comments: Links to this post

My most recent visit to Sarasota’s excellent “Selby Library” had me looking for one or more of Taylor Caldwell’s novels.  I’d heard that she was a fine writer, and I was looking for her novel “Grandmother and the Priests”.

That book was not on the shelves so I picked out another Caldwell with the intriguing title “God’s Little Acre”.  It was not until I was back at home that I noticed that this book was not by Taylor Caldwell, but by Erskine Caldwell.

Published in 1933, “God’s Little Acre” is a searing tale of the lives of poor farmers in Georgia, and textile mill workers in North Carolina.  It’s a raw and tough tale which still has the power to shock 77 years after it was published.

I am glad that I was not paying attention when I borrowed this powerful novel from our library, for I was utterly engaged with this book by Erskine (rather than Taylor) Caldwell.  It’s a novel whose themes are far from being historic.  They are being lived out in many a poor rural community even today.

Posted by J. Michael Povey at Thursday, September 09, 2010 No comments: Links to this post


1.      Not all the news is bad!  See for example http://onfaith.washingtonpost.com/onfaith/undergod/2010/09/church_welcomes_new_neighbor_a_mosque.html

2.      I have mixed feelings about “Sam’s Club”, (part of the Walmart Empire).
Re: Walmart.  On the one hand the big box Walmart stores have driven many local “Mom and Pop” out of business.  On the other hand, when a Walmart store is located in a smallish and poor rural town, the residents of that town are enabled to purchase food, clothing, electronics, appliances etc at decently low prices.
Re: Sam’s Club.  This is the semi-wholesale division of Walmart where people can buy essential items in bulk, e.g. 48 rolls of toilet paper, or 10lbs of chicken, or 96 rolls of paper towel, at a good price.
“Sam’s Club” also enables (for example) local Convenience Store proprietors or Cafe owners (etc) to buy essential and re-saleable items at reasonable prices.
I sometimes shop at Sam’s Club because its’ very plump and juicy “Rotisserie Chicken” is better than any that I can buy in the local supermarkets; and also because Sam’s Club one of the few places around here where I can buy Fair Trade Coffee.
It is impossible to be “Simon Pure”.  (I will leave you to look up the reference to “Simon Pure”)
3.      Who would/could not enjoy Stilton Cheese?  It is a Blue Cheese right up there in the Pantheon alongside Roquefort, Gorgonzola or Danish Blue.
One of my local markets stocks “Stilton” which is crafted in the town of Ilchester in the County of Somerset – very near to my native city of Bristol, U.K.
Damn it is expensive cheese.  Even more damn it is delicious!
A sliver of Ilchester Stilton with a bit of apple, pear, or cantaloupe is a dessert to die for!
Posted by J. Michael Povey at Wednesday, September 08, 2010 2 comments: Links to this post

And so it goes.

Nonetheless I had some wondrous Brussels sprouts with my supper/dinner  tonight!  When I eat sprouts I stop asking "why?".  I simply say "wow"!

The world would undoubtedly be a better place if more people, in more places, learned to rejoice in sprouts!

Posted by J. Michael Povey at Tuesday, September 07, 2010 2 comments: Links to this post

I should have known better

It was probably more than four years ago that I last ate fried chicken: that is until yesterday.
I’ve abstained for two reasons.
First: because friend chicken is not a very healthy food.
Second: because it is hard to find truly excellent fried chicken.
I have been eating very healthily all this year (and have lost more than 45lbs in weight), with lots of good fruit and vegetables, white meat or fish, and next to no rice, pasta, bread or potatoes: that is until yesterday.
Yesterday at dinner time my body revolted against yet more stir fry or roasted vegetables, and grilled fish. It cried out “I want fried chicken”.
Now I can scarcely pass a KFC without gagging. The smell from the exhaust pipes of the fryers is vile.
But a friend had asserted that “Popeyes” had good stuff, so off I drove there to get my three pieces of fried chicken, with a side of coleslaw, a biscuit and a soft drink thrown in.

(Two of the pieces turned out to be nothing more than wings, and the third piece was half a breast). I had opted for white meat rather than dark, and “spicy” rather than spice less.
I salivated as I drove home. It was a scandalous waste of saliva. The three bits of chicken were thickly coated in a semi-glutinous, under-fried, and inedible batter with which I had to wrestle before I could find the few morsels of edible chicken. (I exaggerate when I say “few morsels”!). It was a horrid dinner!
I do not believe that my body had lied to me. It was saying that after 8 months on a low fat, low sodium, next-to-no carbs regime it was time for a treat; time for some disgustingly unhealthy food.
The mistake was in my choice to go to a fast food joint.
In about four years from now I’ll be searching for a true “southern cook”, one who knows how to fry chicken to perfection, and serve it with collard greens, macaroni and cheese, and home-made biscuits.
(If I can find such a person in 2014!)
(The photo’ illustrates the difference between American and British biscuits. The biscuits we eat with hot meals in the U.S.A. are like those on the left). 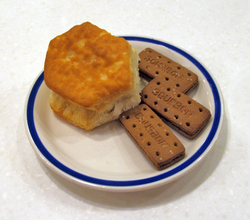 Posted by J. Michael Povey at Monday, September 06, 2010 No comments: Links to this post

Posted by J. Michael Povey at Sunday, September 05, 2010 No comments: Links to this post