A peaceful Oasis in the heart of a City.

Come June I will have lived in Sarasota FL for eleven years, (I still find it hard to believe that I retired to Florida of all places!)

In these almost eleven years I had often read about Arlington Park but had never visited it. Until now.
It's a gorgeous oasis in the heart of the City of Sarasota, (but it is owned an maintained by Sarasota County).  (Yes, we have both City and County Government here).

The entrance of Ben into my life caused me to seek out and visit Arlington Park.  (Did I tell you that I have adopted a Greyhound named Ben. Maybe I forgot to tell you!!)

Tongue in cheek aside,  I have discovered Arlington Park  -  it's a wonderful semi-rural enclave  in the heart of a busy City.   Best of all, it is utterly available to one and all.

Arlington Park has a nice half mile walking trail.  Our Bayfront Park has the same, but Arlington has super shady areas, just the place to walk with my dog on hot summer days.


Then he submitted to his leash and we resumed our walk.

You bet that we will go back to the Arlington Park dog area so that Ben can run to his heart's content.

With or without a dog do enjoy the sylvan glades at  Arlington Park.[take Waldemere (west)  off  South Tuttle Ave for the parking lot].  It is indeed a peaceful Oasis in the heart of a City.

Ben went on the lam. Hue and cry in neighbourhood.

It took less than thirty seconds.  I had rinsed a can and decided to take it out to my re-cycling bin which was already curbside on collection day.

I neglected to shut the front door before I opened the porch door, and in about the time it takes to say aluminum or aluminum Ben had made a break for it.

He paused at the end of the car port..I called his name.  He looked at me, gave me the finger,  and trotted off west.

I called him again, He looked again, gave me the finger again, and ;proceeded further west then went into the car port at Bernadette and John's home.    John saw Ben, called him over and petted him (it did not occur to John that it was odd for Ben to be out alone - I understand).

I cried out "grab his collar" but it was too late.  Ben gave me another withering look and went to explore Nancy's car port.

Now Nancy's dogs spend a lot of time on her porch, behind a locked screen door. Ben's visit caused them to bark enthusiastically. This alerted Nancy who came outside, as did her immediate neighbour Ed.

My last call to Ben was a failure.

He took off and sprinted south for about 150 yards through a grassy area. His strength and energy were awesome. Although I was worrying about where he would go and how far away he would go, I was yet in awe at the beauty and grace of his sprint.   He ran like a (well yes) Greyhound!

Neighbour John and I took to our cars. in search of my handsome Ben.   In the end Ben did very little other than to explore other car ports.  John spotted Ben first, and the  dog who had given me the finger came running with joy towards my next door neighbour, who then opened the rear door of his car, whereupon Ben jumped in (!) and was driven in style back to my home.

With gratitude to my neighbours  (who eventually numbered eight) for their concern for Ben and me,

With wonder at the sight of Ben's awesome sprint. 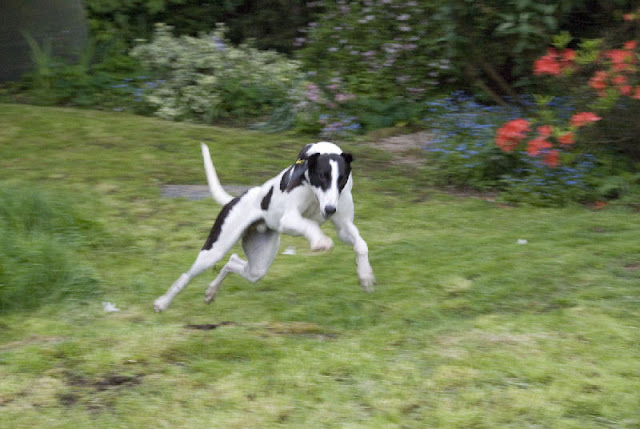 This is not Ben.  It is Monty, a Greyhound Rescue who lives in Cumbria U.K. His markings are a bit like Ben's, but the chief reason I posted this is to illustrate the joy, beauty and exuberance of a Greyhound sprint.


P.S.  When Ben and I got back into our home I did not scold him.   That would have been pointless since his "escape" was not a matter of his naughtiness, but of my carelessness. Instead I gave him a treat to celebrate his return home.

And today I bought him a "Big Boy" feeding station to make his life here more enjoyable. 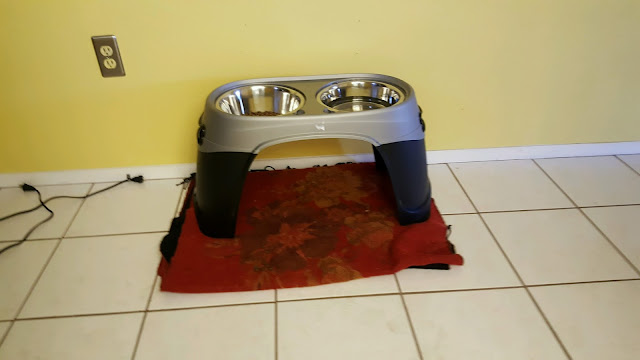 Palm Sundays I have known

Posted by J. Michael Povey at Thursday, April 06, 2017 No comments: Links to this post

Most Tuesday mornings I hang out with a bunch of Clerics; some retired, some still parish ministers,

It's much better that you imagine!   In truth it is almost essential for our spiritual health.

We take a gander at the Scriptures for the following Sunday and to share thoughts as to "how to preach it".

Sometimes we get to be very silly.  Oft-times we are gently serious.

It's a group in which grand-standing and/or professional rivalry are notoriously absent.

Next Sunday is Palm Sunday.  We ignored the Palm Sunday lesson, the First lesson and the Passion Gospel.

Instead we focused on the Epistle, Philippians 2:1-11.  Who would not, with that marvelous and poetic early Christian statement of faith contained in verses 6-11?

2If then there is any encouragement in Christ, any consolation from love, any sharing in the Spirit, any compassion and sympathy, 2make my joy complete: be of the same mind, having the same love, being in full accord and of one mind. 3Do nothing from selfish ambition or conceit, but in humility regard others as better than yourselves. 4Let each of you look not to your own interests, but to the interests of others. 5Let the same mind be in you that was* in Christ Jesus, 6 who, though he was in the form of God,
did not regard equality with God
as something to be exploited, 7 but emptied himself,
taking the form of a slave,
being born in human likeness.And being found in human form, 8   he humbled himself
and became obedient to the point of death—
even death on a cross.
9 Therefore God also highly exalted him
and gave him the name
that is above every name, 10 so that at the name of Jesus
every knee should bend,
in heaven and on earth and under the earth, 11 and every tongue should confess
that Jesus Christ is Lord,
to the glory of God the Father.

But, even as we talked about verses 6-11 we reminded ourselves that these verses are not "stand alone".  They are set in stone in the context of the ways in which Christians live together in the Body of Christ not as an abstract concept, but in the rough and tumble of life in a local congregation.


jmp
Posted by J. Michael Povey at Tuesday, April 04, 2017 No comments: Links to this post

The Book of Isaias

I once asked my Mum why Welsh people were unpopular in Bristol, U.K.  She told me that it was because in the Depression many Welsh people immigrated to Bristol, and took the best jobs.

Mind you, Wales was about thirty miles away, and the Welsh were also subjects of the United Kingdom.

It's the same dreary story throughout the world. "Immigrants"  (yes all of them!)  are dirty, lazy, unwilling to work and eager for government handouts. Although they are lazy, they take the jobs which rightly belong to citizens.

Name any country throughout the world which has received immigrants (documented or undocumented) and in that country you will hear the same old saw.

Thus it has been in the United States for Italians, for Irish, for Catholics, for Jews,  ever since the mass migration from Europe to America began.  The same vile things were said about them as are now being said about political and economic refugees who come here seeking for some kind of opportunity and freedom.

What is never said is that these successive groups of immigrants have enriched our American lives beyond imagination.

It is with this in mind that I heartily recommend "The Book of Isaias.  A Child of Hispanic Immigrants Seeks His Own America", Daniel Connolly, St. Martin's Press, 2016.

It's a tender, sad, and sometimes hopeful true account of  the brilliant young Isaias (and others) who are at Kingsbury, a  failing High School in Memphis, TN.

Author Daniel Connolly spent three remarkable  years at Kingsbury High, three years which enabled him to write this marvelous book of hope and despair. In a remarkably objective way he identifies the cultural, sociological, political, educational and economic ways in  which Hispanic immigrants ("legal" or "illegal");  poor African-Americans, and poor White-Americans are ill served by the educational and economic policies which are dictated from Washington (whether the President be Clinton, Bush, Obama or Trump). 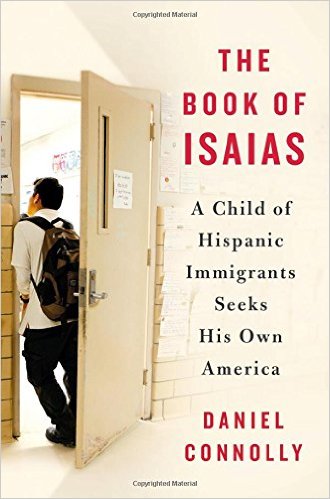 1. Do read this book before you sound-off against immigrants with a "one size fits all" formula.

2. Remember that the most recent comprehensive immigration policy in the U.S.A  was under (of all people) President Ronald Reagan.

3. Resist any national policy which separates mothers from children, or husbands from wives. This is unworthy of a "Christian and family values" nation.

4. Note that many undocumented immigrants in the U.S.A. are from China, India, Ireland and the United Kingdom.  Put that in your pipe and smoke it President T.

5.  Remember that I am an immigrant.  I love my homeland, but I am glad to be a United States Citizen.  Am I on your mind when you sound off against immigrants, or do you give me a pass because I am a WASP?

6.  Read the book dammit!  Read it.  Shut up about immigrants until you have read "THE BOOK OF ISAIAS"

Posted by J. Michael Povey at Monday, April 03, 2017 No comments: Links to this post

I tried to find a collective noun for greyhounds.

All I could find was the distinctly dull and unimaginative  "Leash of Greyhounds".

Oh come on, we can do better than that!

I was at Pet Smart on the South Trail last Saturday for a Racing Dog Rescue Project "Meet and Greet" event.

I was there, Ben was there, about eight other Greyhounds were there.  The beasts were so happy to see each other.

It was a "Gregarity of Greyhounds". 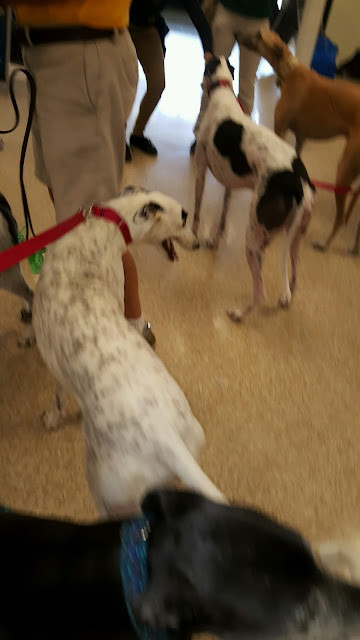 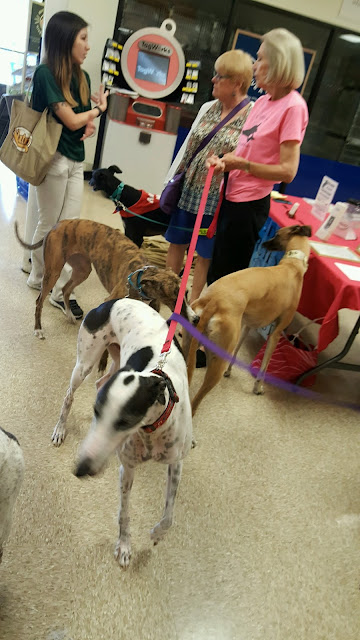 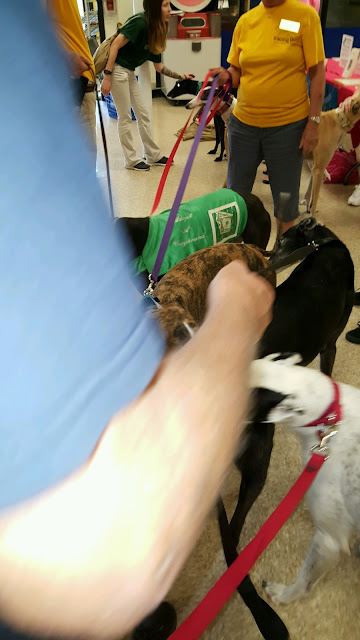 Posted by J. Michael Povey at Monday, April 03, 2017 No comments: Links to this post