At about 4:00 this afternoon I was in my kitchen doing some ironing. (Yes, I iron shirts, dress-shorts and pants [trousers] which come out of the dryer avec some wrinkles.)

The kitchen window was open, and balmy (72 f) air was wafting in. It was a delicious moment.

That delicious moment led me into fantasy.

Now I am in the U.K. It is 4:00 p.m. on a balmy June day. I am in a suburban or rural house. We are seated at an oval table. It looks out through opened French doors to a terrace or patio, and then to a typical English garden. The garden has a daisy be-clad lawn, a few small trees, and an abundance of roses. It is the scent of roses which wafts into the room.

The table is clad in a linen cloth. On it there are bone china cups and saucers, plates and tea-pot. There is a sweet little milk jug, and a sugar basin with cubed sugar and delicate silver tongs. There is a tea-pot dressed in a cozy.

We are eating delicate sandwiches – “Hovis” bread with cucumber or watercress filling.

On a nearby “tea-trolley” there are some sweets.

I see good jam and clotted cream: - sandwiched in a sponge cake, (or maybe on a scone). Perhaps some slivers of Bakewell tart. Or maybe those fabulous little open-faced “jam and desiccated coconut tarts” which Mum used to make.


There are four of us at table. My brother Martyn will know that our mother is one of them. She loved this sort of middle-class event (especially the bone china).
I am there too, since I have gleefully inherited some of my Mum’s snobbery.
There are two other people at table. They are a retired Bishop; and our hostess (an elderly widow, from the stock of local gentry). Mum and I are in our element.

We are talking about the “Iconoclast Controversy” (NOT!)
Posted by J. Michael Povey at Saturday, March 20, 2010 1 comment: Links to this post

“The most difficult part of attaining perfection is finding something to do for an encore.”
“If you’re being run out of town, get in front of the crowd and make it look like a parade.”
– Authors Unknown
“What is a committee? A group of the unwilling, picked from the unfit, to do the unnecessary.”
– Richard Harkness

Posted by J. Michael Povey at Friday, March 19, 2010 No comments: Links to this post

A wolf and a tuba


I had not heard this piece in “oh so many years”, yet I could clearly hear the opening theme. In my semi-somnolent state I thought that it was written by Tchaikovsky.


That memory took me back some 60 years to when Miss Lucy Fenlon, headmistress of Greenbank Infants School had us sit on the wooden floor of the school hall to listen to “Peter and the Wolf”. I was probably aged 6, and this was one of my early encounters with classical music.


Next, in these wee hours on Tuesday I remembered the silly and lovely bit of music called “Tubby the Tuba” see


That is another bit of music from my childhood which I had not thought about in years. The video above is from the original 1947 version which I had never seen before, (ain’t ‘YouTube’ wonderful!).

Who knows? But “hear” and remember them I did!


This evening I was listening to the radio. This is unusual for me for I generally prefer the silence of my home. My wandering ears jumped in to focus when I heard that the next piece of music to be played was ... “Peter and the Wolf”. Of course it is by Prokofiev not Tchaikovsky.


It was fun to hear the music again - so odd since I had long since forgotten it, that is until the wee hours of Tuesday morning.

Posted by J. Michael Povey at Friday, March 19, 2010 No comments: Links to this post

Owning a home means that there is “always something which needs doing”, and that “there is never enough money to do it!”

In my case I try to make at least one improvement or renovation each year.

Last year I was able to have tiles laid down on my screened-in porch (It measures 29’ x 13’). The tiles replaced a ratty old pink coloured carpet which I had disliked from the day I bought this home.

This year our Condominium Association used one of our designated “Reserve Funds” to have the outside (stucco) walls re-painted for each of our 197 single storey units.

My unit was duly painted. This gave me an incentive to undertake some external improvements.

Two were simple – the replacement of a rusty mail box; and the installation of new outside lights (to replace the decrepit 35 year “original” lights).

The other two were less simple.

First, to pave the little patio area: this adjoins my car port. When I bought the condominium this was little more than a dirt patch in which was planted a few mediocre cacti.

I disposed of the cacti and covered the area with pea-gravel on which I placed some potted plants. This marginally improved the “look”, but it was hard to maintain.

So I had all the dirt and pea-gravel removed and replaced with good paving.

Second, to replace the “edging” (it separates the planting area from the grass around the 176 linear feet perimeter of my home). The 35 year old concrete edging was both ugly and decaying.

I got three estimates, two of which were competitive and one which was some $300 higher.

I chose the middle bid, not because it was the cheapest, but because I had a greater sense of confidence in the contractor.

My confidence was not misplaced. The work was done in the space of one day! And it was done to my highest satisfaction.

But here is the cool bit. The contractor and I sealed the deal with no paperwork. We simply shook hands.

He gave his word, and I gave mine.

I trusted him to do the work. He trusted me to pay him. That’s a terrific way to live and to do business.

“Our word was our bond”.


Here are some before and after pictures, together with one of the contractor. 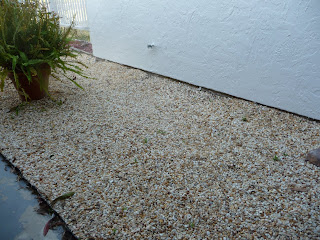 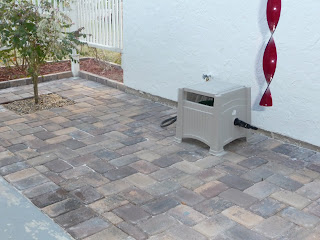 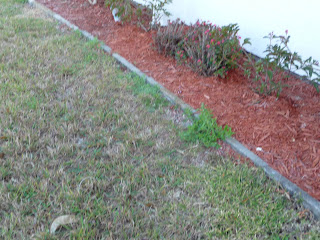 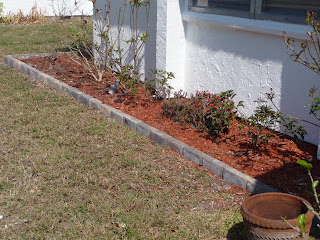 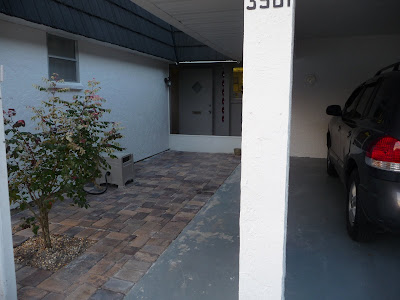 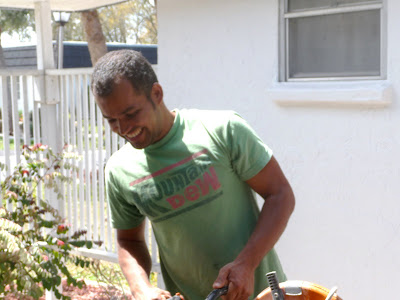 Posted by J. Michael Povey at Wednesday, March 17, 2010 No comments: Links to this post

I see the silly side of things 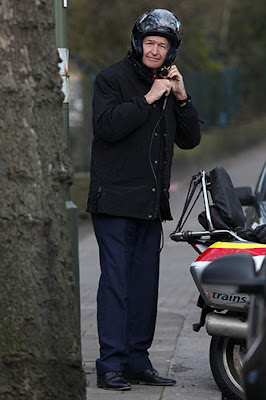 The photo' above is of British T.V. newscaster Jon Snow as he is about to mount his motorbike. I saved it from today's (March 16th 2010) "Guardian" newspaper. Snow had just attended the funeral of veteran Labour Party M.P. Michael Foot. ( Michael Foot, a semi-hero of mine, was one of the vanishing breed of true lefties in the U.K. and in the U.K. Parliament. He died in his nineties).


Michael Foot was not silly, nor are funerals.
But the Guardian's "tag" underneath this photo' made me grin. This is exactly how it read:

"Newsreader Jon Snow leaves after the funeral on his motorbike"
leading me to wonder how one could have a funeral on a motorbike!


It should of course have read:

"After the funeral,  newsreader Jon Snow left on his motorbike"

Posted by J. Michael Povey at Tuesday, March 16, 2010 No comments: Links to this post

“In the evening I went very unwillingly to a society in Aldersgate Street, where one was reading Luther’s preface to the Epistle to the Romans”.  Thus wrote John Wesley about his experience on 24th May 1738 when he attended a meeting of a Moravian Society in London, a meeting at which his “heart was strangely warmed” to know that Christ had died for him.
This morning, I went somewhat unwillingly to an Episcopal Parish Church (which shall be nameless) here in Sarasota.  My “unwillingness” was not because of the event (a funeral), but because this particular parish Church is entirely unfriendly towards God’s gay and lesbian children, and because this parish church will not allow the ministry of my sister priests.
I’ve been known to say that I would never lighten the doors of this place because of its opposition to women priests.
(I like to think that I do not darken the doors of any place, but that I lighten them!!)
But I was there for a funeral.  I did not know the women who had died.  But I know and respect her husband who is one of the finest and most consistent volunteers at Resurrection House.  I was at the Funeral service to pray, and to let this man know that I could try to share his grief.
The service used “traditional” ( i.e. 16th Century) English.  That was alright with me for I understand that prayer can be in any language under heaven.
But the Priest read the prayers with no more enthusiasm, verve or sense of conviction than he would have expressed whilst reading the ‘phone book.  It “felt” as if he were saying “let’s get this over and done with”.
I held my breath and my tongue. I reminded myself that I was there to pray and to empathise with my bereaved friend.
And then it happened.  The “it” was when my spirit soared.  The liturgy included a prayer by Cardinal Newman.  (John Henry Newman was a 19th century Church of England Priest who became a Roman Catholic and was made a Cardinal).
You’ll get to the prayer in a moment.  First you need to know that late evening and twilight have always been the times of the day when I have felt most wistful and sad. They signify to me not only the end of a day, but also the end of life.
Newman’s prayer is good for the end of a day.  It is also good for the end of a life.
I cannot read it without being both sad and wistful.
Here it is:
O Lord, support us all the day long
until the shadows lengthen and the evening comes,
and the busy world is hushed,
and the fever of life is over,
and our work is done.

Then, Lord, in thy mercy,
grant us a safe lodging,
a holy rest, and peace at the last.  Amen

This morning's leaflet at St. Boniface on Siesta Key identified both the organ prelude and the postlude as being a "fuge" by J.S.Bach.

The Revd. Andi (Andrea) Taylor preached a crackerjack sermon on "Being found by God".

I truly like my cats, but I find it hard to be patient when Adelaide is in one of her whiny moods as she has been today.

Similarly, I find it hard to be patient when Penne has to stop every 20 yards on our walks to sniff and pee. How do canines manage to save up so much urine?

Nonetheless I do get a "charge" when Penne, Adelaide and Ada take over my bed, as they did this morning soon after I got up. 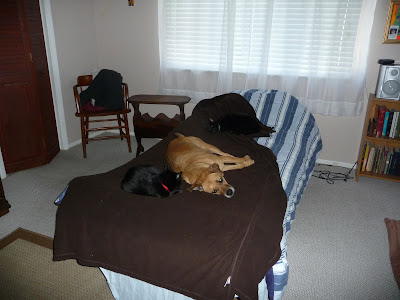 I sometimes make meals not only for their nutritional value, but also for their colour. Here is a salad I served today.
It includes beets, red and green bell peppers, marinated asparagus and sliced navel orange; together with my home made curried chicken salad (which includes celery, chopped walnuts, and halved red grapes) - served on a bed of red leaf lettuce. 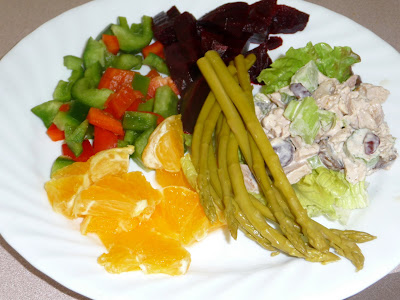 Posted by J. Michael Povey at Sunday, March 14, 2010 No comments: Links to this post