I did not mean what they thought I meant.

March 13, 2010
Last night, as you may have read, I was at St. Boniface Church on Siesta Key (Sarasota. FL) for a Friday night “Fish Fry”.
At table with me were my friends Dave F., Bob and Clare T, and Ron and Charlotte T.
Ron T. commented favourably on my recent weight loss.
This made me happy. (Losing weight is not easy).

With ne’er a naughty thought in my mind I responded to his good words by saying “it is difficult to keep it up”.
I was making reference to my weight loss programme.
My table companions, led by Clare T. responded with hearty laughter at what they took to be a “double-entendre”.
I blushed, and then joined in with the laughter.

March 12, 2010
It’s been an unusual winter here in South West Florida. Since January we’ve almost constantly had temperatures below normal, and we’ve had not a few frosts.

It warmed up a bit earlier in this week, and we began to think that spring, if not summer had arrived.

Then it hit us. A stalled “weather system” over the Gulf of Mexico brought us more than 12 hours of rain. In those hours we had just under 3”. Thunder rumbled near and far. The temperature never rose about 64f, but it felt chillier than that.

Penne does not mind the rain, so we managed to get in about 4 miles of walking. Even with an umbrella I got quite wet and soggy.

By about 4:00 p.m. I was feeling downright grouchy. I went down to my Church for the Friday “Fish Fry” (10 bucks for pan fried tilapia, coleslaw, corn-bread, macaroni & cheese, with a chocolate chip cookie and soft drinks - a bargain!)

A bargain it and of itself with the added bonus of being at table with my friends: David F, Ron and Charlotte T, and Bob…
1 comment
Read more

Hoist by my own petard

March 11, 2010
My local newspaper the Sarasota Herald-Tribune has been awash with stories of the vehicle traffic delays at St. Armand’s Circle.

St. Armand’s Circle is a traffic circle/roundabout/ rotary at the heart of St. Armand’s Key. (In Florida the barrier islands are known as “Keys”)

St. Armand’s Key is totally built up, and it took a while before I realized that it is in fact an island, linked to Longboat Key, Lido Key, and the mainland by various bridges and a causeway.


Folks who live or take vacations on St. Armand’s, Longboat or Lido Key have to drive through St. Armand’s Circle in order to reach the mainland.


And those of us who live on the mainland have to drive through the Circle to get to some superb beaches, or to shop and dine at the upscale establishments on St. Armand’s Key.


I have to drive through the Circle in order to reach my “second parish”  All Angels-by-the-Sea on Longboat Key.

I was at All Angels Church yesterday afternoon for a 4:00 p.m. event.  As I chatted with one of the churc…
Post a comment
Read more

From Pet Peeves to Pove's Pets 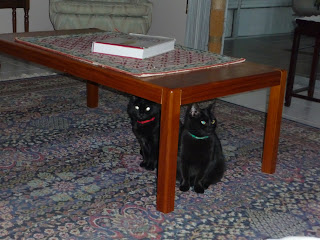 My good friend David Foster came to my home for dinner the other night.

My cats decided to look at us from under a coffee table. Ada has the red collar, Adelaide the green.

They are not sisters. But I do prefer black cats!


My dog, Penne, decided to hog the sofa so that she could listen in as David and I chatted. 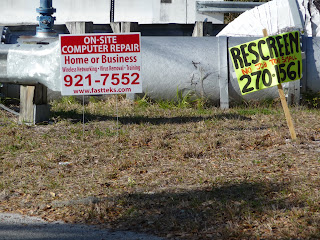 #1.
I do not care for the advertising boards which spring up in our neighborhoods. (see photo’s). I see them as yet more urban pollution. So I pluck them out of the ground whenever possible.


#2.
The incessant noise of leaf blowers is another form of pollution, this time not visual but auditory.

I suggest that the Great Litany of the Anglican Churches should include this:

“From the whining of leaf-blowers: Good Lord deliver us”

I pray this especially for the neighbour who uses a leaf blower at 6:00 a.m. whether or not there are leaves to be blown.


#3.
I get a wee bit ancy when, as I pay for my goods, the clerk/cashier at a supermarket or pet-store asks me if I would care to give a dollar for this, that or the other charity.

I despise this for three reasons.

First, I think that my charitable giving should be planned, not impulsive.

Second, I believe that that giving should be sacrificial. Any fool can give a dollar. Wise people give generously. They sacrifice other pleasures for the sake …
Post a comment
Read more

March 08, 2010
All Angels by the Sea, Longboat Key, FL is my "second parish".  I was there yesterday when their Rector preached this good sermon.  It is published with his permission.  jmp
Lent 3C 2010 (Luke 13:1-9)             Why do bad things happen to good people? That is a question all of us ask, and have for centuries as evidenced by today’s Gospel. We hear today how some listeners of Jesus asked him about the Galileans who had been killed by Pilate while they were offering sacrifices in the Temple. Were they greater sinners than others that they should suffer so? And what about those 18 innocent people who were killed by the collapse of that tower in Siloam. Was it because of their sin? Of course we could add the hundreds killed in Chile and the hundreds of thousands in Haiti.
In one form or another, Jesus was repeatedly asked to comment on the problem of evil and disaster so prevalent in this world. Time and time again Jesus condemned the notion that human tragedy is pun…
Post a comment
Read more

March 07, 2010
This has been a super day. A day in which I have thought “even if there is no heaven” I will be very grateful.


I walked my dog Penne about an hour ago at 6:30 p.m. (This was our 6th walk of the day!). The air temperature was 60f – great walking weather. We did two turns around a local pond in which the sunset pink clouds and jet-plane contrails found a perfect reflection.
The trees, many of them leafless after our recent cold snaps, were in immaculate silhouette against the western sky. There was one bright star in the west.
Beauty was all around – some human made, and some from the evolutionary Creative Process which I call God.
Church this morning at All Angels on Longboat Key was good. I go there once a month and help out when needed, or else relax in a pew. Rector David Danner preached a superb sermon on “God as a good luck charm, or as a faithful friend”. (I have asked David to send me his sermon to publish on this blog).