Lunch at home today (thanks to Trader Joe's)

A four ounce fillet of Dover Sole  (broiled with a little butter on top),  with ....

It was so very good.

Who wants to live with me, and eat well?

* "Fava Beans" are what people in the U.K. (and other Commonwealth Countries)  call "Broad Beans". I ate these frequently when I was growing up, and enjoyed them.

But the Trader Joe's "Italian Fava Beans" are more delicious than I could have imagined as a lad.

They have, of course, first been taken out of the pod:  (that's essential when eating broad/fava beans).

That being done the  T.J's product has advantages over the Broad Beans of my youth.

First, the beans  are smaller and much more tender.

Second, the tough outer skin of the shelled beans has been  removed.

(I  do this when I buy Fava beans "in the pod" at one of our local produce markets, but boy-oh- boy it's a labour intensive task).


Posted by J. Michael Povey at Saturday, March 21, 2015 No comments: Links to this post

Lunch with dear friends on Longboat Key (and comments about traffic).

My blessed and dear friends Jack and Pat McL are "in town" for their annual sojourn  on Longboat Key, a barrier island in the Gulf of Mexico, west of Sarasota and Manatee Counties.

Jack and Pat were fabulous parishioners when I was the Rector at St. Stephen's Parish, Pittsfield, MA.  Pat worked with me as an extremely effective (lay) minister for Christian Education.

The McL's retired to Wolfeborough, N.H., where I visited them more than  once, (and participated in the wedding of their younger daughter Jen - a super young woman - to Scott D).

Jack and Pat were more than delighted when I retired to Sarasota, a town with which they have become familiar for (say) forty years.  (Pat's parents had retired here).

Jack and Pat come down from New Hampshire to SRQ for three weeks every year.  They always stay at White Sands on Longboat Key, just fifteen miles from my home.

(In Florida the "Keys" are off-shore barrier islands),

With that in mind we have been able to get together each year (usually in March).

We did so today, and had lunch at  http://marvista.groupersandwich.com/

It's a cool and unspoiled  place on the bay side (intra-coastal waterway) of Longboat Key.  We ate inside (rather than waiting forty minutes for an outside table).  I ate three very good fish tacos (with flounder), and we shared some Key Lime Pie for dessert.

It was a lovely time.

Jack, Pat and I will get together again next Saturday afternoon  for the season finale of the Sarasota Opera:  a performance of TOSCA, after which we'll have a bite to eat.

BUT OH THE TRAFFIC!  It took me nearly fifty minutes to drive the fifteen miles from my home to White Sands.

Clearly we are over-developed, no thanks to  a process which I call "the Miamification of Sarasota".

Sarasota used to pride itself  on  being "not Miami".

But with the election of "pro-growth  Republican" majorities to  our City and County Commissions we are becoming more like what we did not wish to be - i.e. Miami.

It's very similar to what is happening in my home City of Bristol U.K. which is fast becoming a replica of the over-developed London (some 120 miles east).

The builders, developers and politicians call  this "development", which in their minds is an unassailable good.

And in our so-called democracies,  the builders, developers and politicians call the shots, regardless of the wishes of the voters.

Utterly over-developed  as we are  ( I could weep),  I was saved from angry tears,  by the pleasure of being with Jack and Pat.

Posted by J. Michael Povey at Friday, March 20, 2015 No comments: Links to this post

I am not always sure what my cats, Adelaide and Ada, are "up to"  when I sleep, but I know that they are "up to no good".

The evidence is that they set out to destroy my home on their nocturnal prowls.

I state my case:


The mat by my kitchen sink twisted into odd shapes.
Cupboard doors opened.
"Runners" removed from tables.
An overturned and damaged table lamp.
Any object on any side table batted to the floor.
And a determination to awaken me at 4:30 a.m.
If I close my bedroom door, one or the other of them will "come-a-scratching" the door  at that early hour.
If I close it, one or other of them will "yowl"  at that same time.
Last night was bad (as I discovered this morning).
I'd left a bag of "Temptations" cat treats un-zipped on a kitchen counter.  Such an irresistible temptation for Ada and Adelaide!
They managed to eat some of the treats; to "bat" some of them into the kitchen sink; and to move the bag to my front hallway.
One of them,  (most likely Ada),  rewarded my careless and unintentional generosity by coughing up a hair-ball into a saucepan which I had left on the stove top for that very purpose.
The "Temptations" treat bag will be in the fridge tonight.
But Ada and Adelaide will continue to dream up and act nocturnal naughtiness unless I also place them in the fridge each night.  Now there's a thought!
My friend Susan H  placed this cartoon on her Facebook page today.   It speaks to my condition! 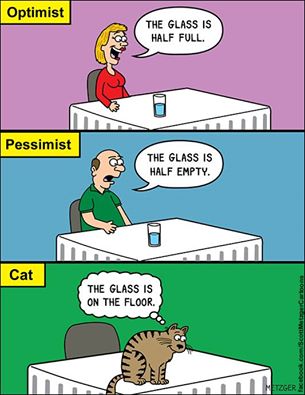 My good friend and colleague Wes Wasdyke called me yesterday to ask if I would care to join him at a baseball game on Tuesday 17th,  (Orioles v Twins) here in SRQ.

It was a kind offer, but I turned him down, because the game would have been completely wasted on me.

He told me that Cindy Wasdyke had advised him not to call me, saying that "Michael hates sports".

I had to tell Wes that I do not hate sports, but that I am mostly indifferent to them.

I added, "sports for me are a bit like turnips.  They have their place, but I can no more be devoted to sports than I can be passionate about turnips".

Posted by J. Michael Povey at Monday, March 16, 2015 No comments: Links to this post

There is nothing like a "less than adequate" sermon (shall we say) to set me off on to a grumbly mood.

Sermon or not, I have been very grumbly today.  Hence I am a "grumbletonian".


Grghhh!
1.  Why do my neighbours set out their old furniture roadside on a Sunday,  when our Condo. Association rules mandate that such items should not be set out until Wednesday evening?  (Thursday is our trash collection day).
2.  Why do my neighbours set out plastic bags filled with raked leaves on a Saturday night when (a) the Condo. Assoc. requires that they not be set out until Wednesday evenings, and (b) the City mandates that yard waste should be contained in large paper sacks,  (all the easier to grind and be used to make mulch).
3.   Why do some of my neighbours allow their dogs to roam free?, (against the rules).  These owners may well believe that their pets are graciously harmless.  That may well be the case, but how can they be sure that other dogs (such as my Penne) are more than skittish around stranger dogs.


4.  What is it about "Stop" signs which lead some drivers to believe that they are exempt from stopping?    As I walked out with Penne this early evening some nincompoop of a driver decided that one of our stop signs did not apply to him.

I responded with "these stop signs are here to slow you down, so that pedestrians such as I can be safe". (There are no sidewalks in my community).

The driver claimed that he had stopped in good time, notwithstanding that his vehicle was more than half way over the white line.


5.  I bought some  frozen "Halibut in Batter"  from Trader Joe's,  to have for lunch today.

The package contained many very small portions of Halibut (maybe the off-cuts from larger fillets), in a batter which did not cook well.

It is to be avoided.  I suspect that good Halibut does not need batter.

But the baby asparagus I got at T.J's was very good.


There, now I feel better.