December 21, 2013
I attended a funeral at my Church (St. Boniface, Siesta Key) this morning.  It was for a wonderful man named Joe Hinds (1924-2013).  I always loved to greet Joe and his wife Nancy after services, so was happy to be able to show my respect and love for Nancy this morning.

At the reception which followed the service I chatted with another of my favourite parishioners Carolyn W.  I said that I had seen (but not been able to greet) her Marine son, Jody.

Jody is just back from a tour in Afghanistan with the Marine Corps Special Forces.

Some of you will have read in the British and American press about the young American couple who were on their honeymoon in Australia this week.  They sky-dived (the wife in tandem), and the husband, an experienced jumper went solo.

Something dreadful happened on the way down, and as a result the husband was killed.  I glanced at this story and thought: "how awful, to die as a result of an accident on one's honeymoon".

A novelist and Pope Francis:The Joy of The Gospel.

December 20, 2013
In her novel  "Flight Behavior"  (Harper-Collins 2012)  the great novelist Barbara Kingsolver writes about  the struggles of life in rural Appalachia.

In the early pages of the book a number of women are working together to comb sheep fleeces for burrs and bits of straw.

They are presided over by a very religious family matriarch  named Hester.

Hester's daughter in law Dellarobia is not so sure about the certainties of conventional religion.

Here is an excerpt from Chapter Two:  "They (the women) all attended Hester's Church, which Dellarobia viewed as a complicated  pyramid scheme of moral debit and credit resting ultimately  on the shoulders of the Lord, but rife with middle managers"


Good Lord above, as a semi-retired Priest , I know that I have often been a controlling middle manager.

I think that the tantalisingly wonderful Pope Francis also knows all about this.

This was on account of Ada's up-chucking for three days, and her inability to retain and digest both dry and wet food.

The locum vet listened to me. He chastised me because I had not brought Ada in for treatment on her first day of vomiting.

He examined Ada.  Her temp was fine. There was no fever. Her vitals were good.  She had lost 1lb in weight since 2011.

Then the  vet injected Ada with an anti-biotic  ( strange since there was no diagnosis).  He also gave her an anti-nausea shot, and took some blood to be tested.

Ada  remained "under observation"  until 4:00 p.m. at which time she was released to my custody, (sans the blood test reports which we will get tomorrow).

Here is a bit about it.

Such cemeteries are sometime known as Potter's Fields   see:

All that being said I was at the Sarasota County Pauper's cemetery this morning   to pray at the internment of the ashes of someone I had never known.

His name was Rich.  He hailed from New Jersey.

Rich had been on his own since the age of 16 by which age both his Mom and Dad had ded.

He died some weeks ago at the age of 60.  He had been dead for five days when his corpse was found in  a trailer (caravan) in which he lived in SRQ.

The "authorities"  could identify but one contact for the deceased , a retired firefighter named Mike B  from Buffalo NY  who now lives in this part of FL. 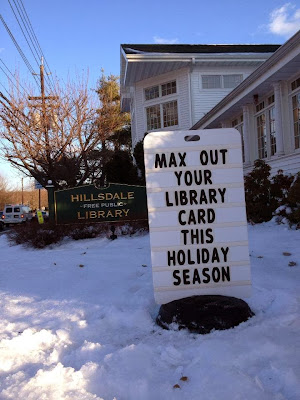 I am a frequent and grateful patron of Sarasota County's public library.  I find it hard to imagine life without them.

This library in Hillsdale N.J. gets my vote for the "library sign of the year".  (Photo' via my friend Regina L.W.)

The strange ways of Dennis Rodman.

December 15, 2013
The following (it is long) is from the newspaper of the DRPK.  It is the "rationale" for the execution of  Kim Jon Un's  uncle  Jang Song Thaek.  It is an amazing example of Soviet style "purple prose".

Given the brutality of the DRPK regime I find it hard to understand why Dennis Rodman considers Kim Jon Un a friend, and why Rodman is willing to coach the DRPK National basketball team.

Has Rodman lost his marbles?  Is he naïve?  Is he a buffoon? Is he a self-promoter?

Who knows?  Your guess is as good as mine.

All the crimes committed by the accused were proved in the course of hearing and were admitted by him.

A decision of the special military tribunal of the Ministry of State Security of the DPRK was read out at the trial.

Every sentence of the decision served as sledge-hammer blow brought down by our angry service personnel and people on the head of Jang, an …
Post a comment
Location: North Korea
Read more
More posts