Cyber-terrorism and my "what if?"

I think that it was about 100 years ago that my sister-in-law Wendy decided to earn some “pin money” by delivering telephone directories.

Well, maybe it was more like 20 years ago, but I happened to be on holiday in England at that time, and I spent some time with Wendy and my brother Martyn lugging those books and delivering them to every home in a local neighbourhood. It was not an easy task.

I was reminded of this when earlier I saw the photo’ which I have posted below.

“We” get all this information from the internet, not from a book!

Fewer and fewer of us have land lines, thus we have little use for a ’phone book.

All well and good, but I have a concern. I ask “what if cyber-terrorists were able to disable the internet, voip, and mobile ‘phone systems?”

Would we then regret our lack of old fashioned land-lines and ‘phone books? 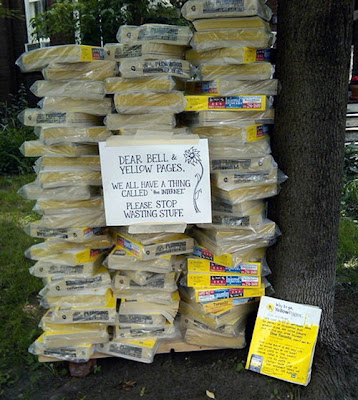 Posted by J. Michael Povey at Saturday, March 05, 2011 No comments: Links to this post

White House wannebe Mike Huckabee (R) recently asserted that President Obama grew up in Kenya and that he (Obama) had undoubtedly been greatly influenced by the anti-colonialist Mau Mau movement.


When it was pointed out to Huckabee (a former Baptist Minister) that this was not the case, he claimed that he had mis-spoken and had intended to say Indonesia.


Our President hardly "grew up" in Indonesia.  He lived there for between four and five years at ages 5 -10. (Even with his correction, Huckabee did not acknowledge that the Mau Mau was never in Indonesia, and thus could not have influenced young Obama).


For an excellet historical background, please read the Salon article, (link below  PLEASE READ THE STORY).


I do not believe that Huckabee's words were a gaffe.  I think that they are part of a right wing trend to paint our President as somehow "un-American" -  and therefore even "anti-American".


Their "case" would go something like this:  "He has a funny name.  His father was a Muslim.  He spent four or five years in Indonesia.  He is an anti-colonialist".


This spurious effort  attempts to taint the President with "guilt by association".  (Something which Senator Joe McCarthy perfected in the 1950's).


If, as it happens, Barack Obama is anti-colonialist, I applaud and remind folks that American foreign policy was decidely anti-colonialist from the time of President Monroe (the fifth President of the United States, serving two terms from 1817 to 1825) through the Presidencies of Eisenhower and Kennedy  (with the tragic exception of the Presidencies of McKinley and (T) Roosevelt 1897-1909).


It should be a badge of honour to describe any American politician as anti-colonialist!


The "occasion" for Huckabee's distortions was that a bust of Sir Winston Churchill had been moved from Obama's Oval Office, and placed elsewhere in the White House.  (Ironically - the Oval Office bust was replaced by one of Abraham Lincoln -  who was of course a Republican!)


The London Daily Telegraph (that bastion of right wing nonsense) ran a story which said that the removal of Churchill's bust proved that Obama was anti-British, and implied that our President "hates" the British.  It was this story which influenced Huckabee's trashy nonsense.


It seems clear to me that neither President Obama nor Prime Minister Cameron have any interest in preserving the myth.  That is all to the good.  Nations never have "relationships" -  they merely have coinciding policy objectives.


Meanwhile Huckabee and the like will spread any lie, any delusional story, any crack-pot theory to discredit President Barack Obama.


Of course there is nothing new under the sun! The 1828 election between John Quincy Adams and Andrew Jackson was particularly raw.  But that's a topic for another day.

At least two of the potential Republican candidates in the 2012 American Presidential election are liars. (At least two).

Governor Haley Barbour of Mississippi is one such fibber and obfuscator.

He asserted a couple of day ago that the Obama administration would not be happy until gas (petrol) prices in the U.S.A. reached $9 per gallon, so that the public would be “forced” to buy energy efficient auto’s.

This assertion is a bit of Republican “creative fantasy”, designed to scare voters.

The “at the pump” price of gas/petrol is determined by a number of factors such as:

(a) the decisions of producer Nations as to how much oil to pump at any given time,

(b) the mystical and un-scientific “futures market” which projects future supply and demand, (did you see how prices rose at the mere threat of an interruption in supplies from Libya),

(c) decisions made by refiners, distributors and retailers of gas/petrol,

(d) the choices which consumers make about how much gas/petrol they can afford.

(e) the rates of taxation on retail prices of gas/petrol as determined by governments.

Of the above possibilities only (e) is one which could be determined by the President - but only if and when he could persuade the American Congress to go along with increased taxes.

“does anyone in their right mind believe that President Obama could persuade the current Congress to increase retail gas taxes so that the pump price in the U.S.A would reach $9 per gallon?”

“does Haley Barbour believe so?”.

Of course Governor Barbour knows that no President could propose such a huge tax increase and get it passed by Congress. Yet he continues to assert his nonsense about $9 per gallon gas.

The tragedy is that many American voters will be swayed by Barbour’s lies and obfuscations.

As will others, who believe another possible presidential contender, Mike Huckabee, who asserts that our President was raised in Kenya.  More about him tomorrow.

(None of this is to suggest that my prefered Democratic Party is "Simon Pure".  I believe that it is is "least worst party").
Posted by J. Michael Povey at Thursday, March 03, 2011 No comments: Links to this post

Spring has sprung in Sarasota 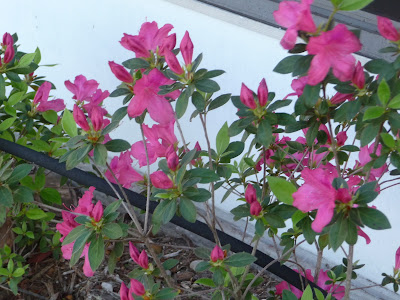 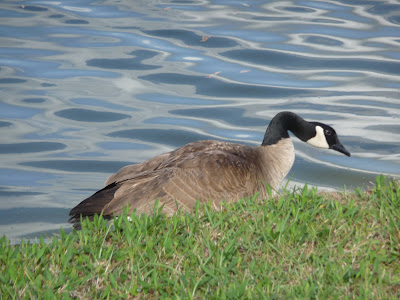 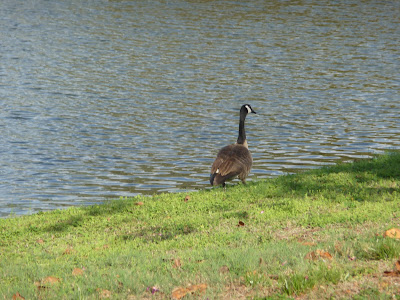 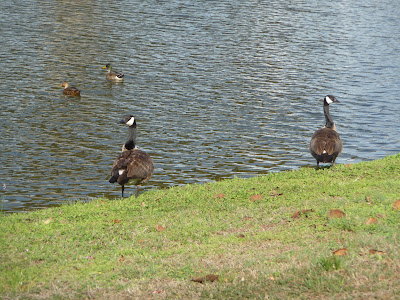 Canada Geese are not often seen here. Right outside my back door today 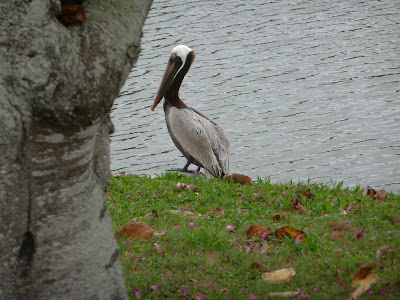 Gorgeous Pelican  -  right outside my back door yesterday afternoon.
Posted by J. Michael Povey at Wednesday, March 02, 2011 No comments: Links to this post

Was there a "Gale Temple"?

Some 55-60 years ago a new born baby girl was abandoned in my home city of Bristol. U.K.

She was left, on a very stormy night, near Bristol’s chief railway station - “Bristol Temple Meads”

Hence the local press [the “Bristol Evening Post“, or the
“Bristol Evening World” (now defunct), or the “Western Daily Press”], gave this abandoned babe a name. One or more of these newspapers called her “Gale Temple”.

I wonder what happened to this wee child.

Did “Gale Temple” go on to have a wonderful life? Or has she been forgotten to history?

I also wonder why I remembered this story all these years later.

Did I remember it correctly?

Or has the miasma of memory deceived me?
Posted by J. Michael Povey at Tuesday, March 01, 2011 No comments: Links to this post

Wayne Farrell, a son of St. Boniface Church on Siesta Key, Sarasota, FL was yesterday ordained Deacon in our Cathedral Church in St. Petersburg (Florida not Russia!). I’d planned to attend this evening ordination but at about 3:30 p.m. I “crashed” - feeling physically and mentally exhausted. So I stayed at home, and took myself to bed, sleeping from 8:00 p.m. last evening until 5:00 a.m. today.

All refreshed, I was ready for a pleasant interlude this morning. My former parishioners from St. James’s, Cambridge, Tom and Susan Harris stopped by with their daughter Kristin Nerich and her husband James Nerich, together with Morgan and Gwen - the little grandchildren of Tom and Susan. (Morgan and Gwen are Kristin and James’s daughters).

It was a wonderful "reunion"  visit.

1.Susan Harris was the trusty Treasurer at St. James’s.
2. I officiated at the wedding of James and Kristin.

The Harris/Nerich clan were en route from Orlando FL (Disney and all that) to Fort Myers FL - to attend a Spring Training game of the Boston Red Sox versus the Minnesota Twins. (The Red Sox won!)

The coolest thing of all involved my sweet and super dog Penne. Little Morgan Nerich has always been a wee bit scared of dogs. But Penne was so sweet and gentle today, that (without any prompting) Morgan began to stroke her.


Hurray for Morgan. And double Hurrays for Penne.

I am blessed with fabulous friends and with a great dog! 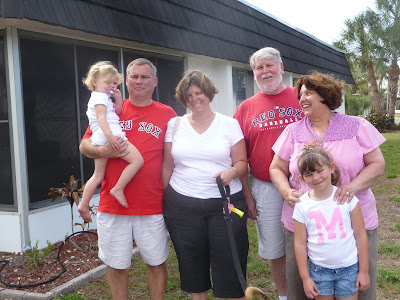 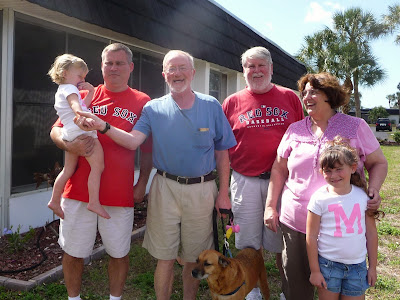 James and Gwen,  jmp and Penne, Tom, Susan and Morgan.
Posted by J. Michael Povey at Monday, February 28, 2011 No comments: Links to this post

When wine drinking began to be  popular in the United States ( during the 1960's) [up until then Americans mostly drank beer or hard liquors], there were many  wine descriptions which were entirely pretentious.

Humourist James Thurber created the following spoof of those "over the top" descriptions:

** "It's a naive domestic Burgundy without any breeding, but I think you'll be amused by its presumption."