no blog entry today
Posted by J. Michael Povey at Saturday, September 03, 2011 No comments: Links to this post

Separation of Church and State

Some christian fundamentalist /right-wing/america first/american exceptionalists  often assert that "separation of church and state" are not in our constitution.


They are right if we are looking for the explicit words  "separation of church and state".


But what is not explicit is certainly  implicit in our foundational documents.  See for instance:


1. From Article Six of the Constitution
but no religious Test shall ever be required as a Qualification to any Office or public Trust under the United States.

2. From The First Amendment to the Constitution
Congress shall make no law respecting an establishment of religion, or prohibiting the free exercise thereof;
I think that Article Six and the First Amendment make two things clear.
First:  Persons of any, many, or no religions may hold public office and trust in the United States.
Second: The United States Congress is not allowed to endorse any religion, not is it allowed to prohibit any religion.
In other words -  government must keep its hands off religious expression, and religions may not make special demands upon government.
Such was the genius of our founders.  It's a genius which modern day american evangelicals and fundamentalists do not understand.

Posted by J. Michael Povey at Friday, September 02, 2011 2 comments: Links to this post

I ranted a bit the other day on the media "frenzy of speculation" as Hurricane Irene moved up the eastern coast of the United States.

What I failed to note is that the popular media thought the story was "over" once Irene had crossed New York City, and had been "downgraded"  to a "tropical storm".

It was not only the media.

"John Q Public"  (a.k.a.  Michael Povey) also  had  a bit of amnesia about his friends in Vermont.  But two days ago I began to worry about my dear friend and colleague the Revd. Diane Root and her (equally dear to me) partner Margaret Campbell, who live in Killington, Vermont.

Their 'phone was dead for a couple of days, but I was able to reach them today.  They are safe and sound.

Fortunately they had stocked up on groceries the day before the storm  (n.b.  their nearest Supermarket is 15 miles away).

They were without electricity for three days  (no electricity = no tap water) but their good neighbour Tim was able to supply them with good water from a spring on his land. ( We forget how many Americans are dependent on spring or well water -  it does not all come via the City or County).

They tell me that many of the roads in their neck of the woods are still impassible.

Diane told me that the under-reported story is that "there are good stories, Neighbors  helping neighbors. Local contractors and excavators repairing  local   driveways and roads for free - putting in untold hours without expectation of pay.  It's amazing and wonderful"


Diane added: "thank you for calling - helped make our day"

Posted by J. Michael Povey at Thursday, September 01, 2011 No comments: Links to this post

I've just read "My life as an author and editor" by H.L. Mencken  (edited by Jonathan Yardley and published in  1993 by Alfred A Knopf Inc).

Mencken knew a thing or two about what he called "The American Language".  So I took note when he used the word "buncombe" in contexts where you or I might use "bunkum".

Here, from Wikipedia, is an  explanation of  the word buncombe; a word which emerged in common parlance as bunkum.


"In 1820, Felix Walker, who represented Buncombe County, North Carolina,in the U.S. House of Representatives, rose to address the question of admitting Missouri as a free or slave state. This was his first attempt to speak on this subject after nearly a month of solid debate and right before the vote was to be called. Allegedly, to the exasperation of his colleagues, Walker insisted on delivering a long and wearisome "speech for Buncombe". He was shouted down by his colleagues.His persistent effort made "buncombe" (later respelled "bunkum") a synonym for meaningless political claptrap and later for any kind of nonsense.Although he was unable to make the speech in front of Congress it was still published in a Washington newspaper."


As for H.L.Mencken  himself  please do your own research on this brilliant  man who was (in more or less equal parts)


2. a libertarian and a scourge of the religious.


4.  an acerbic and witty writer  who was anti-puritan and anti-british.

Posted by J. Michael Povey at Wednesday, August 31, 2011 No comments: Links to this post

Immigrants/Shop lifting/ Use of the English Language


Some Poles are moving into our neighborhood. 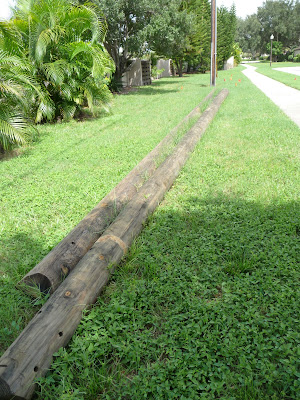 
I walk at least 4 miles each day with my dog.  As a result, I wear through the soles of shoes in four to six months.  So I  went to my local Target Store this afternoon to but some new sneakers/trainers.

As I browsed I saw a pair of size 9 trainers/sneakers on the Target shelf.  I noticed that they were fairly dirty.

After a few seconds I "got it".  Some man had been in the store.  Then he had  left his old and grimy sneakers on the shelf, and walked out with a brand new pair.

I called an "Associate" to point out this "crime", but she was less than enthusiastic about  what I had found.  I suppose that my "find" was not rare.  It seems to be that many stores "write off" such shop-lifting as a matter of course.

Of course we are all paying that little bit more to cover shop-lifting losses such as this.

Use of the English Language


The following announcement was placed on my front door today.  It is from the Glen Oaks Ridge Condominium Association. I reproduce it exactly as it was written.

NOTICE
Wednesday August 31, 2011
Water will be Turned Off
From 9 AM - 2 PM
In Section 1 & Partial  Section II
By the City of Sarasota
To Replace the Association's Water Meter
Please Boil Your Drinking Water
For the Next 72 Hrs.
By request of the City of Sarasota.
Note, if you will, the odd way in which many words begin with  capital/upper case letters, I suppose that this is to indicate that this is a "very serious announcement". Thank goodness we were spared from a plethora of exclamation marks!!!!!!
But what I am supposed to do in response to directive to "Boil Your Drinking Water for the Next 72 Hrs".
Does this mean that I should boil drinking water for the seventy two hours after the notice was affixed to my front door?
Or should the notice have indicated that I should boil drinking water "subsequent" to the shut down of the water supply?
"Next" and "subsequent" are not synonyms.
Nor are "majority", "most" or "bulk" -  but you'd never know this by learning from the words of T.V. and radio reporters.
For example: What do reporters mean when they say (e.g.) "the bulk of people"?
T.T.F.N.    jmp

Posted by J. Michael Povey at Tuesday, August 30, 2011 No comments: Links to this post

Labels: This and that: Tongue in cheek
Location: Sarasota, FL, USA

It was ten years ago today that our Mum passed from this life.


But we all called her "Mum", (and teased her by calling her Maud).


Mum gave birth to ten children, one of whom, our sister Sylvia, died soon after birth.


The nine of us who grew up remember our Mum as a classy woman.


We respect and admire the amazing way in which she raised nine children -  it was an exhausting business.  We are so grateful for her life, love and example.  We do not grieve for she was ready to die.


But of course we still miss her and think of her often.


This photo' was taken a matter of weeks before her death. 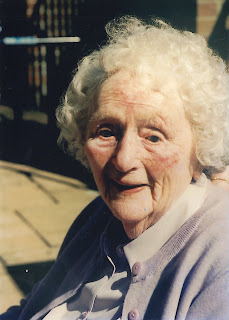 Posted by J. Michael Povey at Monday, August 29, 2011 No comments: Links to this post

Hurricanes can be very dangerous.  Hurricanes can be deadly. The combination of extremely high winds and severe rainfall with widespread flooding, (and with the possible “spawning” of tornadoes) can cause great damage to beaches, woods, roads, houses and commercial buildings.  Those conditions can be deadly to both man and beast.

The case in point is Hurricane Katrina (2005).  At least 1836 people died as a result of that storm, and there was an estimated $81 billion worth of property damage.

No one has every estimated the damage to hopes, to dreams, to ambitions, or to family and community life after Katrina. That damage was greater than we could imagine, and six years on, it is far from being repaired.

I do not minimise the possibly catastrophic effects of any hurricane.

But it’s also true to say that Hurricanes “have a mind of their own”.

2. They can “come in like a lion and go out like a lamb” as they churn over the ocean - but never reach the land.

3.  They can change trajectory and speed.

All this is basic science and meteorology. But you’d never know this if your only source of information was from radio, T.V. or the internet.

CNN’s reportage was distressingly short on facts and information.

But it had an abundance of speculation.  Breathless, melodramatic, and over-excited “reporters” rarely told us what had happened, or even what was happening.

Instead they nattered incessantly about all the awful possibilities if “this, that, or the other” might happen.

It seems that many T.V. reporters have become “drama queens”.

They are ill-informed speculators in the markets of disaster.  They prostitute their skills in favour of drama.

They do not report on what happened.

Instead they major in the speculative “information stock exchange”; and trade in a “news casino” in which opinions and prognostications trump the facts.

Posted by J. Michael Povey at Sunday, August 28, 2011 No comments: Links to this post