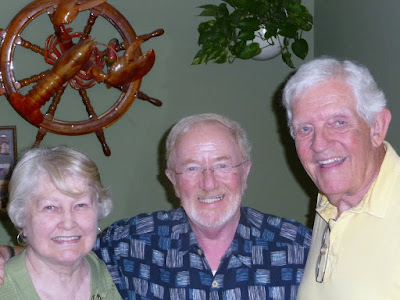 ...or could it be "dedicated raconteur?" or "chef extraordinaire?"

Here he is with his good wife Donna and with me


I'll think of Jack and Donna on Sunday  as I eat this -  cold - with potato salad, sliced tomatoes, and watercress.

Ada goes to the Vet. 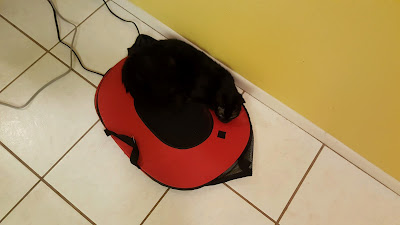 She is such a gentle cat who will jump onto any willing lap for a bit of TLC.

She and I went to the Vet's Office today.

I described her symptoms:  -

(c) eating as much food as I put out.

She is not well.

There are three possible reasons:


The Veterinarian is inclined to believe that she has a hyper-active thyroid gland, but he is a man of science as well as intuition.

So he drew blood, and extracted urine.  These samples will be analyzed over the weekend.  We should get the results by Tuesday  (Monday is a public holiday).

Ada was so gentle and cooperative as she went through the indignities of being shaved (for the blood draw); the blood draw itself, and the insertion of a catheter to extract urine.

(Should the diagnosis be correct be correct I will "let her go", with tears. She …
Post a comment
Read more

Florida Peninsula - Long and narrow (except for the Panhandle)


So, because we are NOT  in the eye of the storm, but we ARE in the range of the storm, SRQ has escaped the worst.  We've had on and off rain all day long, with a few amazing windy squalls.

'Tis beautiful and amazing to see the flexibility of the branches of huge trees such as "Live Oaks"  as they are tossed to and fro by the winds.

We've had some local flooding, with a few evacuations in the Whittaker Bayou area - 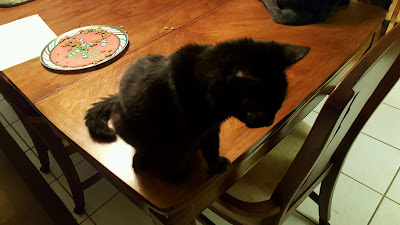 Dearest Ada is getting skinnier each day.

She drinks so much water.

Her pee stinks to high heaven.

She sleeps a lot.

I suspect that she has kidney failure.

I will take her to the Veterinarian on Friday.

I will not allow her life to be prolonged by the use of  medications.


In the meantime my equally dear Adelaide gets to be evermore plump.

It's not what you think. Sleep walking is to blame. 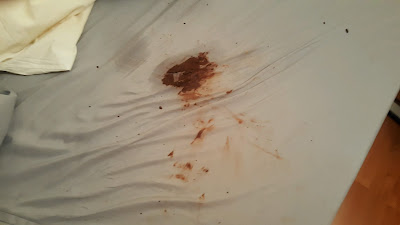 I am a very restless sleeper.  I talk in my sleep, I yell out in my sleep,  I even laugh in my sleep.  (I once laughed so hard that I woke up, and then did not know why I was laughing).

I also sleep walk.   The evidence is in this eeew picture.

It's not what you think!  On Monday night I sleep-walked, got myself some chocolate, went back to bed, held the chocolate in my hot little hand, didn't eat it, instead I let it drop onto the sheet.

This yucky and chocolaty mess greeted me on Tuesday morning -  and I have no memory of my nocturnal wandering!
Post a comment
Read more

With tender and grateful memories of a great woman 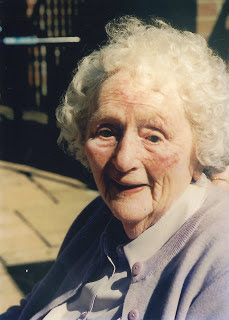 "Our Mum".  a great and gracious woman died on this date, fifteen years ago (at aged 89 years).

I have been thinking about her all day, with deep appreciation, immense respect, and great love.

I know that my sibs and their offspring think the same. 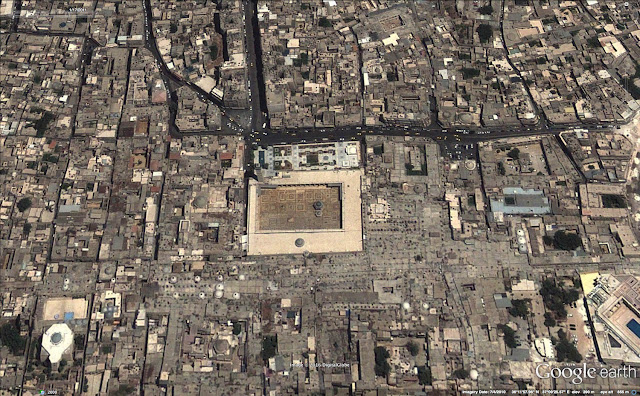 As I walk Penne in the early morning I often encounter a very pleasant woman as she walks to St. Jude's Roman Catholic Church for daily Mass.

On Sundays she walks with her husband for Sunday Mass.

Se we neared each other this morning we heard a loud BOOM coming from the east, a boom which startled us (and Penne).

We commented on this and I said  "can you imagine being in Aleppo where people hear such booms 24/7?".

The man said  "I never heard of Aleppo, where is it?"

"In Syria", I said "the city which is being bombed to smithereens"

"Oh", he replied, "I do not keep up with the news, I have never heard of that place".

I could scarcely believe what I heard.

I should not have been surprised.  What passes for news in the U.,S.A. has to do with the Olympic Games, with the Kardashians, with "Kyle" Jenner, and …
Post a comment
Read more
More posts