A poem for Palm Sunday.

When fishes flew and forests walked
And figs grew upon thorn,
Some moment when the moon was blood
Then surely I was born.

With monstrous head and sickening cry
And ears like errant wings,
The devil’s walking parody
On all four-footed things.

The tattered outlaw of the earth,
Of ancient crooked will;
Starve, scourge, deride me: I am dumb,
I keep my secret still.

Fools! For I also had my hour;
One far fierce hour and sweet:
There was a shout about my ears,
And palms before my feet.
(Thanks to my friend Bruce Lomas who posted this recently on Facebook, and thus reminded me of poem I had long forgotten)
Posted by J. Michael Povey at Saturday, March 28, 2015 No comments: Links to this post

My Aunt Irene and I go back a long way.

It was Irene's birthday yesterday.  She had a grand time.

Her 90th birthday reminded me that she and I go back a long way -  in fact for almost seventy years.  Now there's a thought. 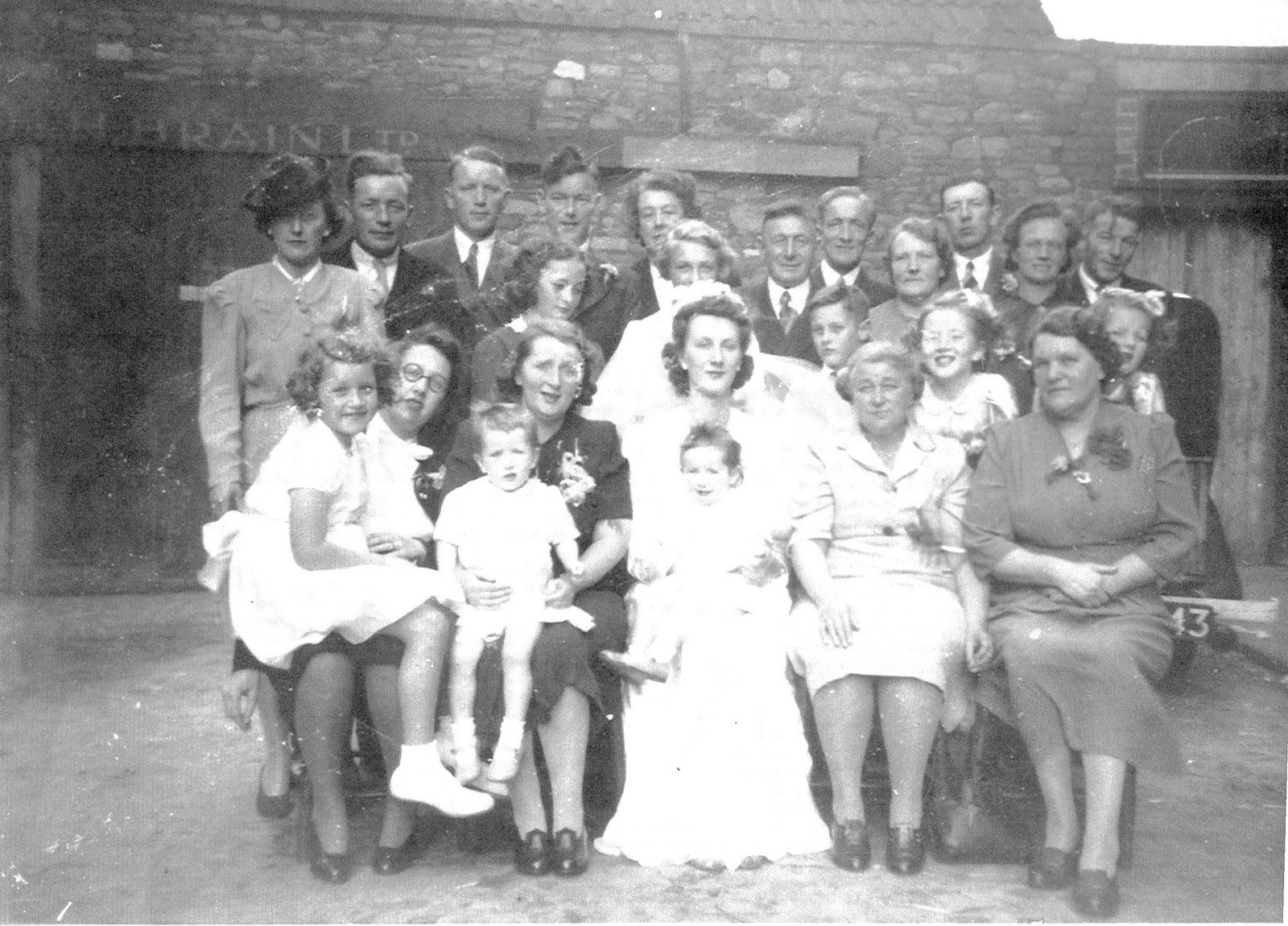 Of the "aunts by marriage" the favourite was and is my Aunt Irene (my sole surviving Aunt)    She is a grand woman.

(Irene has an niece by birth "Kippy" (Catherine), who lives on Staten Island.  Kippy is the daughter of Irene's only brother - a Merchant Marine whose ship was torpedoed in a war time North Atlantic convoy.  Kippy is also a wonderful person.  We share the same Aunt  Irene ( Kippy by birth and I by marriage) so we call each other "cousin".)

Dear and good Auntie Irene celebrated her 90th birthday today in her native city of Bristol, U.K..  She was surrounded by her family members -  each one loving her dearly.

The plan was that Auntie Irene and I would have a Skype video chat, but due to the imperfections of technology we could not make that contact.

I shared a few words with her via my cousin Janet's mobile phone, but the party was so lively that Irene could not hear me.

Ne'er mind,  I will chat with her on Friday 27th, the day after her achievement as a nonagenarian.

I  visited with dear Auntie Irene when I was in the U.K. last May/June. (And she has visited me more than once in the U.S.A.).

She is the only one of my aunts-by-marriage who truly cared for me (since my birth). I think of her with deep fondness and appreciation.  I wish that I could have been in Bristol today to raise a glass in her honour.


Posted by J. Michael Povey at Thursday, March 26, 2015 No comments: Links to this post

THIS IS GOOD: a follow up on my posting about Penne's rumpus with a dog named Sable.

I wrote this on Povey Prattle a few days ago.

"Sable" is a very nice looking Labradoodle  She walks with her owner a man named V. .......  But he and I know well enough to keep Sable and Penne at a safe distance, since Sable is a bit frisky, and Penne dislikes other female dogs. V was away recently  (scuba diving in the Cayman Islands).   Sable was being taken care of by a house sitter/dog walker.  I did not immediately recognise the dog since she was not with her owner. The dog sitter and I exchanged greetings, at a distance of about 4'.  Then Sable lunged at Penne -  so of course Penne lunged back.  Unfortunately Sable got scratched in this ten second kerfuffle.    The dog walker said  "too bad this happened, but Sable was the aggressor". Now V wants me to pay half of the $500 veterinarian bill. Part of this bill was for the first set of stitches, and the other part because the slight wound had to be re-stitched after Sable bit away the first set of stitches.  (Now whose fault was that?) Am I responsible for half of the amount?  I think not!  I will send V. a cheque for a small amount as  a gesture of goodwill, but I am damned if I should feel responsible for half the total.

On Monday I mailed a cheque for $75 to V, with a letter which said: "this is a goodwill gesture, and not an admission of responsibility".

I saw V this afternoon.  He said  "I will tear up your cheque.  I was so pleased  with your expression of goodwill.  The money is not important".

WOW  so there is neighbourliness after all!

I will respond with a gift to the Sarasota Humane Society in V's honour.

Posted by J. Michael Povey at Wednesday, March 25, 2015 No comments: Links to this post

Six years on, and she's spoiled of course.

It was on March 24th 2009 that I adopted Penne via the Humane Society of Sarasota County.  She was then six or seven years old. She may be twelve or thirteen, but she has the energy of a young dog.

Our six year friendship has been an un-mitigated blessing for both of us. It "feels" like we have been together for far longer than six years.  I cannot imagine life without her.

I have been careful to ensure that she is not over-fed and thus over-weight, but I spoil her with well prepared food, served twice a day.

The basis is the Trader Joe brand canned food - "Lamb with rice and vegetables".  It's one of those canned foods in which you can indeed see some vegetables.

My veterinarian  noted recently that she is in good shape, and at the perfect weight for her size.

Penne loves to walk, so we get out for half mile walks at least five or six times a day.   Thus she is well known, and well liked in the neighbourhood.  One person said "your dog smiles when she is walking with you" -  I know what she meant.

And my dear dog is so well behaved, that she is always welcomed in the homes where I am a guest  (unless they also have a dog or two).

She has her favourite people.  One is my friend Bob Lewis -  he is very fond of her, and she knows it.

Penne gets excited when she sees a man named John S whom we encounter some days whilst walking.  Penne lifts up her head and quickens her pace when she sees him -   as you might guess,  that makes him happy.

Two doors away live my friends Ed and Eddie.   Penne is crazy about Ed, but not so much so about Eddie.

Penne often looks up their driveway, hoping to get a glimpse of her pal Ed.  The other day when I was delivering a magazine to "the Eds" Penne got excited when she heard someone coming out of the utility room.  Just as soon as she saw that it was Eddie, and not Ed - she did a 180 and began to walk away!

Penne is most crazy for Ron and Charlotte (her permanent dog sitters when I am away).  They came to my home last night for drinks and nibbles.  We were outside when they drive up the street. I am sure that Penne recognizes the sound of their car -  and she became ultra-excited when they drew near.  Then she raced from door to door as Ron and Char were getting out of their car.  She was barking her "happy bark" and could scarcely decide which one of them to greet first.

And indeed I often breathe a "thank you" to the Holy One for the gift of Penne and for  our mutual friendship.

Posted by J. Michael Povey at Tuesday, March 24, 2015 No comments: Links to this post

Start with mini-pita breads ( the ones which are about 2" in diameter).

Slice them in half (horizontally).

Toast the halves until they are crispy.

When the halves have cooled, spread them with a mixture of cream cheese and red pepper jelly.

(The proportions of cheese and  red pepper jelly are a matter of your choice).

I made some tonight for a wee "pre-dinner party" at my home, which I hosted for Ben, Bob, Ron, and Charlotte.

Evidently my four guests enjoyed them

Posted by J. Michael Povey at Monday, March 23, 2015 No comments: Links to this post

An "ear worm" and other prattle.

A couple of nights ago I had a ear worm.  It bugged me throughout the night.

It's hard to know whether I was dreaming, or waking frequently in the midst of fitful sleep (a bit like listening to a sermon really).

This ear worm started with "Little boy blue come blow on your horn", but just as I got to the line "he's under the haystack fast asleep" it morphed into the Andrew Lloyd Webber "Pie Jesu". Over and over again.

I could not shake it, even as I walked with Penne the next morning.

So I blocked it with "Jack and Jill went up the hill"  -   guess what?  That too became an ear worm.

"Sable" is a very nice looking Labradoodle  She walks with her owner a man named V. (he's a bit of a blowhard).   But he and I know well enough to keep Sable and Penne at a safe distance, since Sable is a bit frisky, and Penne dislikes other female dogs.

V was away recently  (scuba diving in the Cayman Islands).   Sable was being taken care of by a house sitter/dog walker.  I did not immediately recognise the dog since she was not with her owner.

The dog sitter and I exchanged greetings, at a distance of about 4'.  Then Sable lunged at Penne -  so of course Penne lunged back.  Unfortunately Sable got scratched in this ten second kerfuffle.    The dog walker said  "too bad this happened, but Sable was the aggressor".

Am I responsible for half of the amount?  I think not!

I will send V. a cheque for a small amount as  a gesture of goodwill, but I am damned if I should feel responsible for half the total.

(My decision is not influenced by the fact that V and his wife are about to take a two month holiday in the Amazon valley, in Ecuador, and to the Galapagos Islands.  Folks with that kind of loot should  consider spending  a few bucks for dog-training).


On most Sundays I share Holy Communion with C., a St. Boniface parishioner who now lives in an assisted living facility.  After Communion I usually stay for lunch ( and the food is always good).

Today I chose "Orange Roughy" for my entrée.  It was served with asparagus (suitably crunchy), and half of a baked potato.

I had never before eaten Orange Roughy. It is delicious.

When I got home, I discovered that it is an un-sustainable fish, which should not be "harvested".

Damn!  Very tasty fish, but soon we shall all pay a high price for our plunder of the oceans.