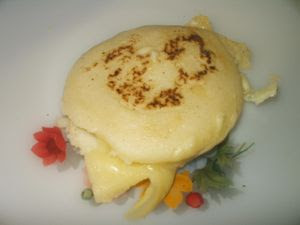 A perfect day!
I was up and at it early (as usual) yesterday, and had my morning walk before awakening Joyce.
After breakfast she came with me to Resurrection House for the weekly prayer service. Happily enough we had a record attendance, with sixteen of us crowded into the small Chapel. Of course my homeless friends loved Joyce!
We met Ben after his volunteer morning at the Ringling Museum of Art and drove off to “Bamboo” an incongruously named South American restaurant, where we met up with my pals Orlando Gonzalez and Jim Detlef. Orlando and James have been partners for 52 years!
One and all were enchanted by Joyce, whilst my heart was beating fast every time our handsome Venezuelan waiter “Jesus” was in the area. (Surely it’s O.K. to be crazy about Jesus!).
I am sure that the whole world has known about “Arepas”, but I discovered them only last week.
An Arepa is small bread made of very finely ground corn meal. Arepas are the comfort food of choice in Colombia and Venezuela.
I usually dislike American corn bread - it is all too often dry and crumbly. But Arepas are something else. The one I ate yesterday was filled with chicken and avocado.
Lunch was such fun, that I invited Ben and my neighbour David for dinner with Joyce and me.
I made a whole mess of stir fried vegetable in my new Wok, and grilled some rib eye steaks.
It was one of those evening for which humans are made – good food, friends, and wine, with wonderful conversation around the dinner table.
Fresh fruit and good cheese made for a simple and healthy dessert.
I went off to bed last night, filled with gratitude for what had been a perfect day.
Later today Joyce and I will drive east to Boca Raton on the Atlantic coast, so I’ll not be blogging until Sunday.
Posted by J. Michael Povey at Friday, September 19, 2008 2 comments: Links to this post

My dear Joyce arrived last night from Scottsdale, Arizona. She’d had good flights via Atlanta, and her plane arrived on time.

Of course we stayed up way past my bedtime, “yakking away” and drinking red wine. So this is a pathetic little blog today.

But do check out
http://www.picsearch.com/ and then click on “Image Directory”.

This is a great source for all manner of photo’s - it’s the site from which I found the recent pictures of Ford cars.
Posted by J. Michael Povey at Thursday, September 18, 2008 1 comment: Links to this post

Poltical Cartoon, and a welcome visitor

My dear friend Joyce Vidal-Thornburg will arrive from Phoenix tonight, for a one week visit. Joyce is the widow of the Revd. C. Michael Thornburg at whose funeral I preached.

But “widow” sometimes misleads us into thinking “very old”!

Joyce is a vivacious, charming, funny and very bright 50 something. I am truly excited that she will visit. We’ve not seen each other for three or four years.
Posted by J. Michael Povey at Wednesday, September 17, 2008 No comments: Links to this post 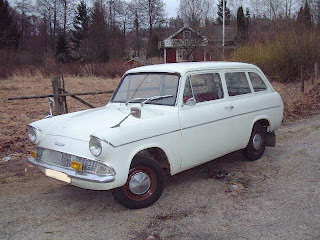 Brother Martyn remembers that my first car was a white Ford Anglia Estate. (I could have sworn that it was greay, but such are the tricks of memory. I trust Martyn’s memory more than my own)

Martyn: “I wish that I had listened to what my grandmother said”
Friend: “Why, what did she say?”
Martyn: “I didn’t listen”
Posted by J. Michael Povey at Tuesday, September 16, 2008 1 comment: Links to this post

I hoved down to St. Boniface on Siesta Key yesterday for the 10:00 a.m. Eucharist. This is where I warm a pew when I am not assisting in other congregations.

I always sit with Adrian and Anno Swain. Anno is a volunteer at Resurrection House. Adrian used to do this too, until a stroke incapacitated him. It’s good to have a “regular” pew with good people alongside one.

St. Boniface is a singing congregation, so I can boom out my baritone harmonies without getting stared at!

The Rector, Ted Copeland preached a sermon which was “over the top”. He reflected on what had happened at St. B’s 7 years ago on the first Sunday after 9/11. He asked us to think about what “might have happened” if our nation had engaged in a period of reflection and forgiveness, and not rushed to wars in Afghanistan and Iraq.

It was a courageous sermon, delivered with great grace. After service I said “you are alright Ted”. He replied “not everyone thinks so”. So I countered with “but I do, and that’s all that matters!”

(During the announcement time he touched briefly on the “mind the gap” campaign at St. B’s, the “gap” being a budget shortfall. He said that the last part of “mind the gap” would be when he writes a “really drippy Christmas letter”. I guffawed, with a sound that echoed around the Church.)

I was driving on air, with my gas tank all but empty. So I had to get gas, and noted that prices had risen by 30 cents a gallon overnight – all, or so they say, because of Hurricane Ike.


Sunday afternoon is often my “get on the ‘phone to friends” time. So I had a good chat with brother Martyn and his wife Wendy. They had just hosted ex-Pittsfield parishioners Randy (Sr.) and Randy (Jr.) Telfer for lunch.

Randy Jr. is 18 years old and is spending a pre-college semester in a New York University programme in London. He’s been a bit lonely, so his dad flew over to England for a long weekend. The Bristol Poveys and the Telfers had a great visit.

This was in keeping with a good tradition. Over the years Martyn and Wendy have hosted four young American students who had been parishioners of mine when they studied in England.

Then a long chat with Joe and Deanne Rokowski in Granby, MA. Joe is one of those students who had trekked down to Bristol. I assisted at Joe and Dee’s wedding some years ago, and we remain good friends. They joined the Episcopal Church a few years ago, and attend All Saints’ Church in South Hadley, MA

Joe mentioned that they were going back to Church Sunday evening for a pot-luck supper to greet their new Interim Rector. He said that her name was “Maureen” or “Noreen”.

“Would it be Noreen Suriner” I asked. “That’s it” said Joe. Noreen and I have been friends and colleagues since 1975.

The Episcopal Church is small, with far fewer than six degrees of separation!
Posted by J. Michael Povey at Monday, September 15, 2008 1 comment: Links to this post

I usually write my blog at night. But I get so tired in the evening. So in future I will “blog” in the early morning.

The following is what I intended to write last evening. I’ll write again in the a.m.

Just because a person has a title, or an honorific, before or after his or her name it does not mean that that person is wise, or has something worth saying.

In America we have “President”, or “Senator” or “Representative” in front of names.

In both lands we have titles or honourifics such as “Bishop”, “the Revd”, or “The Honourable” before names.

(O.B.E. stands for “Order of the British Empire”. It is often awarded to long serving, and senior Civil Servants. My Dad used to say that it stood for “Other Buggers’ Efforts”)

The Press, T.V. and Radio pundits often give great weight to folks with these titles and honourifics.

“Everyman” is tempted to believe that anyone with a title has an opinion worth listening to.

It ain’t necessarily so.

I have met stupid Bishops. I have heard stupid Senators and Members of Parliament.

I have also been blessed by the wisdom of those who have not completed any formal education, nor sought or been elected to any public office.

And I trust that wisdom much more than I trust the opinions of most Bishops, Clerics, Senators or Members of Parliament.
Posted by J. Michael Povey at Sunday, September 14, 2008 1 comment: Links to this post