Curmudgeon3: "You may have guessed that.....

I posted yesterday's blog this morning. Here is today's!

June 10, 2010
Many years ago I promised my colleagues that I would become an old curmudgeon.


(That’s not the same as an old coot. Old coots are the guys who wear dress shirts, below the knee shorts, above the calf socks, (thus exposing no more than 2 inches of aged leg) and black dress shoes. They can be seen on golf courses, or at MacDonalds where the “old coot clubs” meet to discuss the same dreary stuff every morning!)

No I am developing into a fully fledged curmudgeon (of the left of course).


I’ll share a few examples over the next days:


It’s happened before and it happened yet again this morning.


I received one of those “the sky is falling, then Republic is doomed” e-mails. This was the third or fourth time that I’ve received the same e-mail. It expresses "shock, horror, disbelief” that the phrase “In God We Trust” is not to be found on the “new” U.S. “Presidential series” $1 coins.

How I became Michael ( yet still was John)

June 10, 2010
In 1965 I found employment at the lowest level of the U.K. Civil Service.  I became a “Clerical Assistant” at the Bristol branch office of the Inspectorate of Armaments, (I-ARM) and the Inspectorate of Fighting Vehicles and Mechanical Equipment, (IFVME) (both were part of the Ministry of Defence).
In essence I was a gopher for more senior Civil Servants who provided administrative services for engineers. They in turn made inspections at those local firms which had contracts to manufacture armaments, fighting vehicles, and mechanical equipment.
On my first day of work my new boss gave me a tour of the various offices in order to introduce me to the folks I would encounter day by day.
My name is John Michael Povey.  Hitherto I had been known to all and sundry as “John”.  This new boss introduced me as “Michael”.
I am a notorious “people-pleaser” so I did not correct his use of my middle name.
At the end of my first week this boss realized his mistake and told me so.  Since there was alre…
Post a comment
Read more 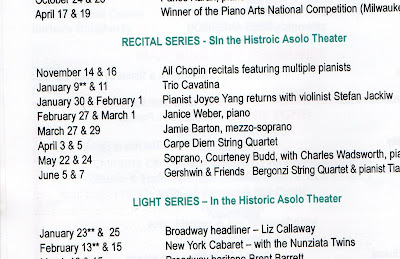 My good neighbour Ed G has gone north to Vermont and New Hampshire for the month of June. Just before he left town he gave me a ticket for tonight’s concert in the Sarasota Artist Series – a ticket which he could no longer use.


As we waited for the concert to begin the two women seated on my left began to talk about “typos”. One mentioned a press release which encouraged people to “compeat”. The other woman talked about the many typos in the New York Times.


I was leafing through the programme for the evening’s concert, even as I listened in on their conversation.


Then my eyes spotted “it”, and I began to giggle. I could not resist pointing “it” out to the woman who was immediately on my left.


The scanned picture will show you what I mean by “it”. Giggle along with me!