June 06, 2009
"Why, Sir, you find no man, at all intellectual, who is willing to leave London. No, Sir, when a man is tired of London, he is tired of life; for there is in London all that life can afford."— Samuel Johnson

With Johnson’s words in mind I took myself to London for the final three days of my English holiday.

There I stayed with my good friend Joe in his nice flat in Pimlico – a “desirable” London neighbourhood.


right on a ‘bus route which will take you all down Oxford Street, and across to Euston, King’s Cross, and St. Pancras Stations.

It is a three minute walk from the Pimlico underground, with links to all of London.

Also no more than three minutes walk away is the Embankment and the River Thames.

And you can walk for about 10 minutes to reach Victoria train, underground, and long distance ‘bus stations.

I have been a lifelong Socialist - England (5)

June 05, 2009
(See the previous entry today for some photo’s of Weymouth and Dorset)

T and W have been friends of mine since 1960. I worked with T for less than a year at the Government Bookshop in Bristol, and soon got to know W his wife, and their daughter L.

(One of the major themes of my life is to stay connected with old friends).

When I saw T and W in 2004 we got teary eyed at the thought that we’d never see each other again.

Here we are in 2009, and we visited again in Bristol. Both T and W have poor eyesight, and T suffers from re-occurring and debilitating bronchial infections. We rejoiced in our visit over a cupt of tea and some biscuits.

T and I talked about the demise of the British Labour Party. This was the party which once stood for the rights of the working classes. Now it seems to stand for no more than hanging on to power.

T said something which rejoiced my heart, mostly because I would never here this in the U.S.A. He said: “I have been a lifelong socialist”. 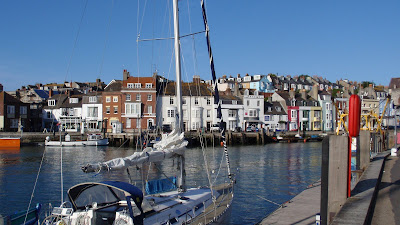 
Oh I do like to be beside the seaside

Weymouth, from the harbour

June 04, 2009
I took a couple days off from visiting my family in Bristol to travel through rural Somerset to the lovely County of Dorset, (occasionally still called Dorsetshire).

Dorset has the loveliest of English countryside, some charming small towns and villages, as well as a spectacular coast.

I took myself off the main roads and marveled at the rolling hills and gentle valleys. Sadly my camera would not work well so I have little photographic evidence of the my trip.

I was in Dorchester, which is the County seat. This is Thomas Hardy country and his statue graces the main street. Dorchester was also the site of the infamous Bloody Assize under the dreadful Judge Jeffries, and a plaque marks his lodging house.

I also made a quick foray into Sherborn with its prep school for the privileged, and its wonderful Abbey Church.

The gorgeous town of Cerne Abbas is the site for the famous Cerne Abbas giant. This enormous man (with a huge phallus) may well not be ancient, it could well be a “poke in the nos…
1 comment
Read more

June 03, 2009
Bristolians are inordinately proud of their City. It is by no means the largest in the United Kingdom, but it is lovely (in parts) and rich with history.

The name is derived from “Brig-Stowe” (the place of a bridge), and that place was settled at the confluence of the Avon and Frome Rivers.

Near the Avon, at a place called Sea Mills, are the foundations of a Roman Villa, though Bristol was never an important Roman settlement.

By 1373 the City was so prosperous, thanks to the export of wool, that it was given county status, separated from the neighbouring counties of Gloucestershire and Somerset.

A later prosperity was rooted in the Slave trade, a trade which Bristol merchants were reluctant to abandon.

The medieval heart of Bristol with its many parish Churches was still intact when my parents grew up. They would have seen St. Thomas’s, St. James’s (Horsefair), St. Stephen’s, Christ Church, All Saints, St. Nicholas, St. Johns-on-the-wall, the Temple Church and St. Peter’s – all within one …
Post a comment
Read more


Fortunately for me, British Airways has a direct flight from Tampa, Fl (about an hour’s drive from my home) to London, Gatwick airport.


My U.K. home was with my brother Martyn, his wife Wendy, and their children Laura and Sam.

So I was in Bristol (our home city) for most of the time, but was also able to take two days in Dorset, and three in London. I’ll tell you more about these trips in the coming days.


This trip was planned so that I could celebrate my 65th birthday with family and friends. This we did in style on May 23rd.


I hosted a catered meal with wonderful food – including goat curry, vegetarian lasagna and quiche. The chefs - James and Michael- did themselves proud.


Six of my eight siblings were there, with their spouses and children. I was happy to reunite with 12 of my 19 nieces and nephews, and a fair sprinkling of my great nieces/nephews. 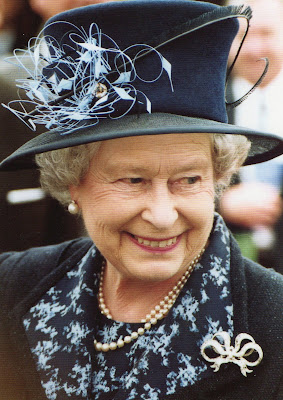 E II R is sad to note that Michael Povey has departed her realm to return to his home in the United States.