Showing posts from February 7, 2010
Show All

Nature - red in tooth and claw. 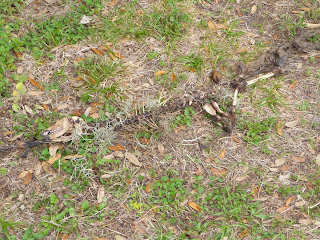 Florida life has much more to offer than the "early-bird - all you can eat" special at the local cafe, with a parking lot filled with big-assed Cadillac and Mercury cars.

There is sex.
I have seen squirrels, snapping turtles, muscovy ducks, and mocking birds in the very act of copulation.

There is violence.
I have seen mocking birds as they dive bombed-crows.   I have seen crows as they dive-bombed hawks.  I have seen a hawk as she/he tried to snatch a duck for a mid-day lunch.
There is murder.
I did not see the murder, but I discovered the skeletal remains.   They were in "no-mans land", a slightly wooded area between Glen Oaks Ridge  (where I live), and Glen Oaks Manor where Ben lives.  I walk  through this area several times each day as I take my dog Penne for her frequent walks.
Here are some photo's at the scenes of  the crime.
My guess is that the victim was a possum.  But I am no biologist, and I'd love to hear other opinions.
I also suspect that a hawk was…
Post a comment
Read more 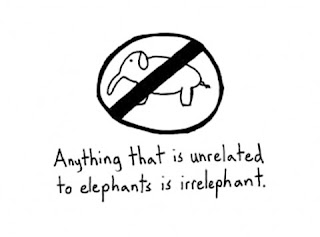 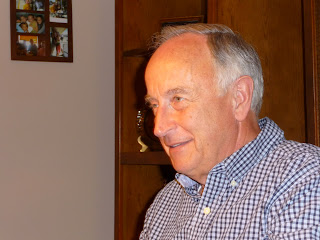 Fred and Diana Emrich came to my home for dinner tonight.

Other will remember Fred from many years ago when he was the curate at St, Peter's, Beverley, MA under the tutelage of the Rector there, the Revd. Homer McCue (sp?)

Diana is a wonderful woman who was born of British parents in India, and then educated in England.

Diana and Fred have been married for about 18 months.

I re-encountered Fred, and met Diana for the first time, last year. They were wintering on Longboat Key, Sarasota, FL and I "bumped into them" one Sunday at All Angels Church on Longboat Key.

It is good to be re-acquainted with a former colleague (Fred), and to get to know a new person (Diana).

Random thoughts, with no deep consequences.

February 10, 2010
Tyres(Tires) are awfully expensive.  I truly needed two replacements - so I am out of pocket $239 plus tax.
Denise, the service clerk who takes care of me at the Hyundai dealership is cool. She remembers my name, and I get the sense that she truly cares about her work.
Riding a ‘bus in Sarasota is O.K.    My local route 6 will take me to the Sarasota Mall, to downtown Sarasota (three minutes walk from Resurrection House), or to within a four minute walk from the Hyundai dealership.  The ‘bus runs every 30 minutes, it is usually on time, and my “senior citizen” ticket costs me only 35 cents.
I find it hard to think of myself as a “senior citizen”, but I was glad to take the ‘bus today, from the car dealership to Res. House and back.
It’s O.K. to get angry with my homeless friends at Res. House when they screw up.  To be “nice” to them all the time would be a form of patronisation.
When G-d gets angry with me it is because she loves me.
I could never summon the energy to be a “vegan”, but I…
Post a comment
Read more

iI ive in my own world, but it’s ok… they know me here 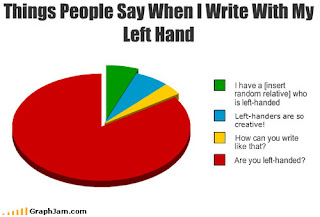 February 08, 2010
National.
The following is as reported by the Boston Globe/

If and when conservatives recaptured Washington, Mrs Palin said she would call for "America's spirit to rise again, to go back to our roots as a God-fearing nation" that would "start seeking some divine intervention".

My serious question is “When was America a God-fearing nation”?

Local.
“G” (see “A tale of two persons [2]”) called me today. I happened to be in his neighbourhood so I drove to his home.

In the U.K. He lives in a council flat.
In the U.S.A. He lives in an apartment in a project.
His monthly disability check had not arrived as should have happened. He asked me to lend him some
money. I refused, but said that I would give him five bucks.

When I had done this he asked for a ride to ‘Wendys” to buy a hamburger. I was a wee bit pissed at this until he told me that for two days he’d had nothing to eat but dry bread. So instead of driving him to Wendys' we went to the supermarket where I…
Post a comment
Read more 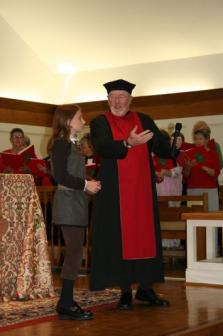 At a 12th Night concert last month at All Angels Church on Longboat Key I sang the role of Good King Wenceslas, with a wonderful young girl, Chase Ryan, as my page. It was not until today that I learned that the "Longboat Key Observer" had published a photo' of our starring roles. Here it is!