Love letters and my learning curve

My beloved friend Dr. Grace Sawyer Jones sent me a copy of the book "Aaron Douglas and Alta Sawyer Douglas - Love Letters from the Harlem Renaissance" (Wisdom House Books 2008).
Perhaps because I live  in a "white bubble"  I had never heard of Aaron Douglas - a key figure of the Harlem Renaissance.  The love of Aaron's life was Alta Sawyer.  She was the aunt of Grace Sawyer Jones.
Jones, with her sisters Linda, Constance, Cyrene and Mariama, came together to have the love letters between Aaron and Alta published in the above book.
The letters reveal a passionate  (in every sense of the word) relationship.   Aaron (know as "Doug") and Alta were High School friends in Topeka, Kansas who later drifted apart.  Alta married a handsome young law student, but after eighteen months she know that she had made a mistake.
"Doug" and Alta re-kindled their friendship and had a clandestine affair.  Alta sought a divorce from her first husband  (almost unthinkable in 1920's Kansas).  The possibilities for scandal were abundant.
Their love letters are
FIRST  those from "Doug" to Alta when he was living in Kansas City.
SECOND  those from "Doug" to Alta when he moved to Kansas.
We do not have Alta's responses, (more's the pity!) She ordered that "Doug" should destroy ever letter she sent him in this period, lest they be "discovered"  and used to jeopardize her divorce proceedings.
THIRD  Alta's letters to "Doug" in 1938 when he was painting and studying in Haiti.
THEM'S THE BARE BONES
But the flesh is all about "Doug's" struggles to complete his education, and his deep longings to achieve his vocation as an artist.  It is all about Alta's critical devotion to him ( and she was no "pushover"!)
Above all (for me) it tells of their rich life in Harlem, and their friendships with such luminaries as W.E.B Dubois, Langston Hughes, Arna Bontemps, and the very great Johnson Brothers  (James and John) see:
http://en.wikipedia.org/wiki/James_Weldon_Johnson and
http://en.wikipedia.org/wiki/J._Rosamond_Johnson
These brothers are best known to Episcopalians as the lyricist and composer for the fabulous hymn "Lift ev'ry voice and Sing" (Episcopal Church Hymnal #599).  What a powerful text.
﻿
Lift every voice and sing
Till earth and heaven ring,
Ring with the harmonies of Liberty;
Let our rejoicing rise
High as the listening skies,
Let it resound loud as the rolling sea.
Sing a song full of the faith that the dark past has taught us,
Sing a song full of the hope that the present has brought us,
Facing the rising sun of our new day begun
Let us march on till victory is won.

Stony the road we trod,
Bitter the chastening rod,
Felt in the days when hope unborn had died;
Yet with a steady beat,
Have not our weary feet
Come to the place for which our fathers sighed?
We have come over a way that with tears has been watered,
We have come, treading our path through the blood of the slaughtered,
Out from the gloomy past,
Till now we stand at last
Where the white gleam of our bright star is cast.
God of our weary years,
God of our silent tears,
Thou who has brought us thus far on the way;
Thou who has by Thy might Led us into the light,
Keep us forever in the path, we pray.
Lest our feet stray from the places, our God, where we met Thee,
Lest, our hearts drunk with the wine of the world, we forget Thee;
Shadowed beneath Thy hand,
May we forever stand.
True to our God,
True to our native land.
ABOVE AND BEYOND THIS
1. I confess my shame at knowing nothing about the truly great American Artist Aaron Douglas until now. (That's what I mean by my "white bubble")
2. I thank God for my friendship with Dr. Grace Sawyer Jones.  She has taught me so much.

http://www.nypl.org/audiovideo/harlem-renaissance
Posted by J. Michael Povey at Saturday, February 28, 2015 No comments: Links to this post

If the tales my parents, aunts, and uncles told were true, one of the greatest hardships of war time life in the United Kingdom was the shortage of tea.  Clearly the importation of tea-leaves from India, Ceylon  (and maybe Kenya) was low on the list of priorities for a war time Government.
Very little at that time could cheer the embattled spirits of U.K. folks other than a good "cuppa char".
By the time I was old enough to drink a cup of weak tea  (probably in about 1948 when I was four years old -  we Brits start the tea habit at a young age), the tea shortage was over.
But then there was coffee.  It may be that the wealthier middle and upper classes had coffee beans to grind, but for we working class plebs coffee came in a liquid essence, bottled under the name "Camp Coffee".  It was concocted by the Patterson Co of Paisley, Scotland.
There was a rival brand known as "Bev", but my family was loyal to "Camp". 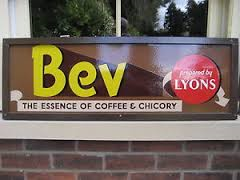 It turns out that  "Camp Coffee"  was made chiefly of sugar and chicory, with a wee bit of coffee essence.
Of course we knew no better, so if coffee was our beverage of choice we used "Camp Coffee".  We would make it with half boiling water and half hot milk - not knowing that we were drinking "Café au Lait"!
When the first instant coffee powder  (Nescafe - made by Nestles)  hit the market we thought it to be a very inferior product.
It is probable that Camp Coffee was first invented for the convenience of Scottish troops in the (colonial) Indian Army, where it was almost impossible to find coffee beans, and then roast and grind them.
"Camp Coffee" was indeed "Ready, aye ready" -  the advertising motif.
It was only recently that I discovered that the distinctive label (which featured a Gordon Highlander and a Sikh)  on bottles of "Camp Coffee and Chicory Essence"  underwent a huge change.
Let me know if you notice the change.

Posted by J. Michael Povey at Friday, February 27, 2015 No comments: Links to this post

Down "The Tramways", my odd dreams, and fifty shades of a blushing face,

At the heart of my native city Bristol, right next to the old in-town docks, is an area which folks such as my parents and grand parents would often call "The Tramways". They would say "I am going down "The Tramways".
They called it thus because it was the centre for the pre-WWII trams in Bristol. 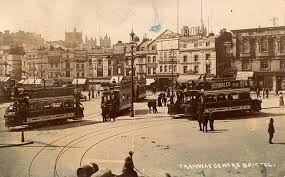 My generation referred to this part of Bristol by the much less evocative name as "The Centre",  all the trams having been destroyed/removed during and after World War II
﻿﻿﻿
﻿﻿﻿
Posted by J. Michael Povey at Friday, February 27, 2015 No comments: Links to this post

The big fat red bandage, which was placed on my left leg by the P.A.  at my Dermatologist's Office yesterday, transformed itself into a garter as I slept last night;  thus revealing the brutal (Dermatologist inflicted) wound which it was meant to cover.
Posted by J. Michael Povey at Tuesday, February 24, 2015 No comments: Links to this post 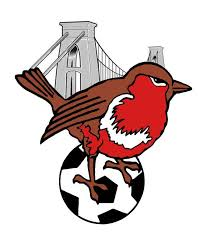 The other week when I was at Trader Joes I bought a bottle of sherry  (I was to have an Englishwoman to lunch at my home that day and I thought that she'd like a wee snifter before lunch.  She did -  but she opted or a Bloody Mary!)
Anyway, I was careless in the manner I placed the Sherry in my cart, and it fell to the ground.  Within seconds four very affable staff members arrived at the scene of the crime and cleaned up the mess.  I suspect that they are familiar with aging klutzes.
When I got to the check out, the equally affable Clerk said  (with a twinkle in her eyes)  "you know, there are other ways of drawing attention to yourself!"
Little did she know.  Today my Dermatologist excised a mean looking lump on my leg (it will be biopsied).
The "wound" could have been covered with a Band-Aid, but the P.A. wrapped my leg in this gorgeous bandage.
Of course it  "draws attention to me", and I will keep in on for as long as possible! (Tongue firmly in cheek). 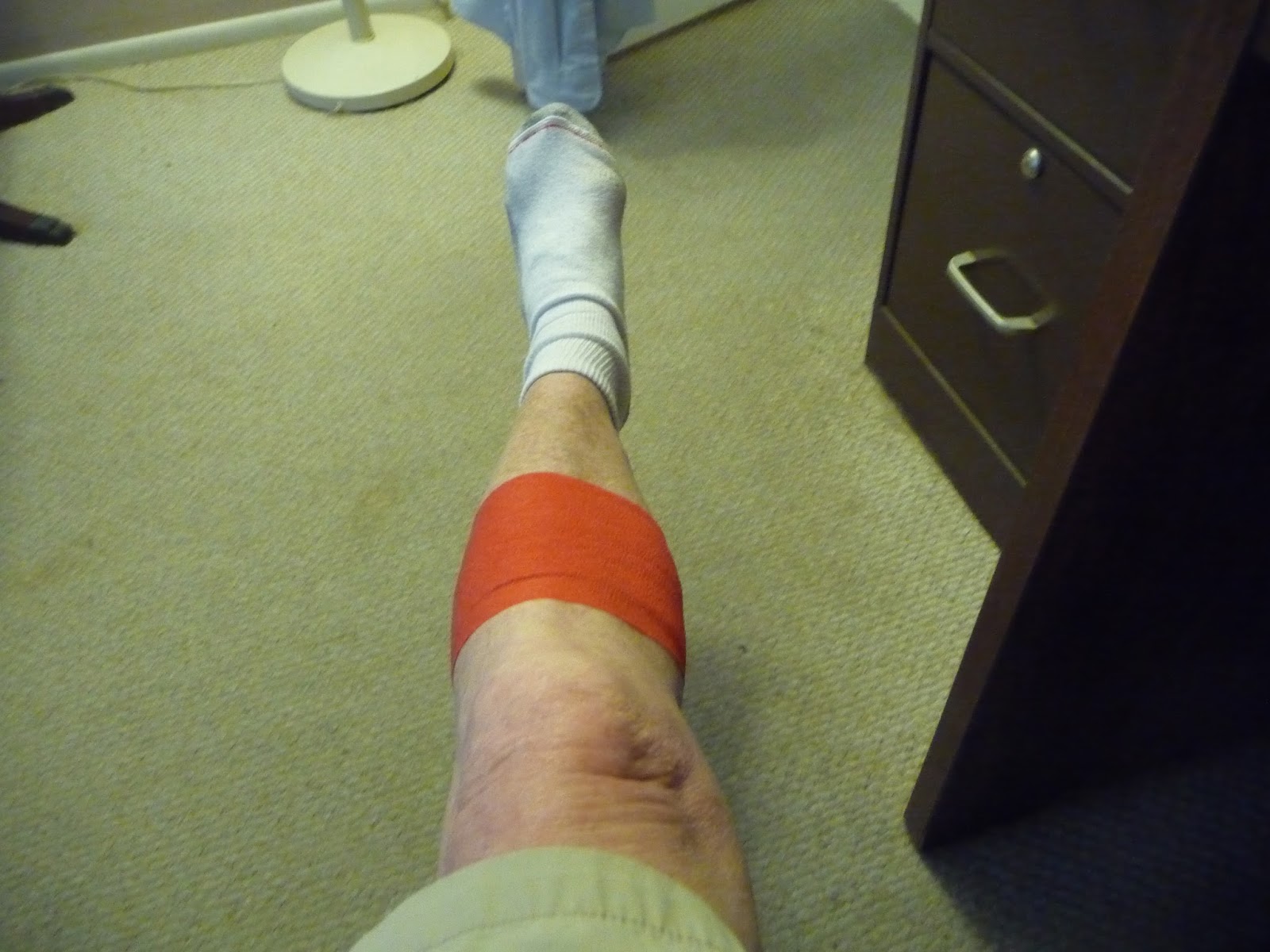 My brother in law Bernard, and my nephew Nick will be pleased to see this  - red is the team colour for our home team, the Bristol City Football Club: "The Robins"﻿
Posted by J. Michael Povey at Monday, February 23, 2015 No comments: Links to this post

What Jesus did not say

Extracted from the blog "Seven Whole Days" by the Revd. Scott Gunn, a Priest in the Episcopal Church who heads up the "Forward Movement" in Cincinnati, Ohio.
Follow me, whenever you get done with more pressing matters.


If you can, try not to sin any more.


Please take your mat and walk, if you get a chance.


Anyone who would be my disciple must love your family first, because that’s what really counts, and please fit your commitments to me around your prior family obligations.


First, go and sell some of what you have, for instance last-year’s fashions, to a vintage shop, and then follow me.


Whenever two or three are gathered, I will be there, so long as you’ve organized yourselves into a committee with a recording secretary.


Repent, or at least think about it for a second, for the kingdom of God has come near, to hug you.


I’m going to tell you a story about sheep and goats, but what I want you to notice is how cuddly both the goats and the sheep are. Seriously  cute!


* Go ye therefore into all the world and, well, be nice. Be really, really nice.
* This last one may be the besetting sin of the Church, (jmp).

Posted by J. Michael Povey at Sunday, February 22, 2015 No comments: Links to this post