The Corporate States of America

My friends and colleagues from Massachusetts days, Manny Faria and Dan Weir each posted this: 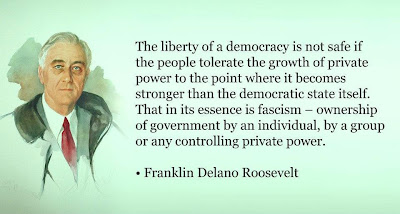 I trust that it is accurate, i.e. that FDR truly said this. (I wish that those who create "posters" such as this would include a footnote which would give the source for their quotations.)

Nonetheless,  presuming that the FDR quotation is accurate I would categorise it as a judgment on “the Corporate State”

We do well to recall that  Fascism is rooted in the ideal of the Corporate State -  a nation in  which the interests of corporations are deemed to be more important than personal and individual  freedoms.

NOTE FOR INSTANCE that 7732 individuals have been arrested between Sep 17th  2011 and Feb 28th 2013  in their individual protests of the abuses of corporate America,.

NOT ONE BANKER HAS BEEN ARRESTED DESPITE THE GROSS, EGREGIOUS  AND UN-PATRIOTIC ACTIONS OF BANK EXECS.

NOTE ALSO that the Agri-business conglomerates in the USA have resisted the open and honest reportage of animal  CRUELTY.   See this for instance:

There is further evidence of the creeping corporate state in the decision by Exxon Mobile to ban flights over the Mayflower, Arkansas oil spill site see:

If you believe that this is just left wing propaganda please note that Ron Paul’s site is also reporting this  (with outrage!).

ExxonMobil has reportedly also threatened to arrest journalists who are trying to enter the spill site.

We are becoming the Corporate State of America.

We are citizens of a nation in  which the rights of individuals are sacrificed in favour of the greed and power of Corporations.
Posted by J. Michael Povey at Monday, April 08, 2013