Cape Cod: The travel and the trip 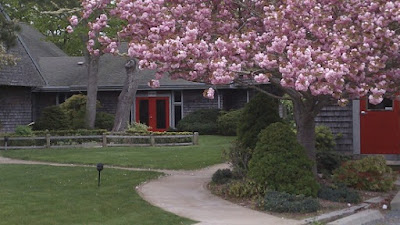 
It was a three day/two night escape from the warmth of Sarasota to the bone-chilling and windy Cape Cod  (I am getting soft in my old age).

I flew Delta, SRQ-ATL-BOS and back.

Travel is a pain.To be sure Delta gave top flight service with each of the four flights departing on time, and arriving on time (or earlier). But I find flying to be stressful, especially when it involves a change of flights in Atlanta.

Everyone goes to heaven or to hell, but they all change in Atlanta.

One can feel the tension increasing about 45 minutes before boarding time. Travelers begin to crowd at the gate, anxious lest they fail to board; worried lest the flight be late. Boarding is increasingly troublesome, especially since some flyers attempt to convince the gate agent that their steamer trunk is small enough to fit in an overhead bin.  I wish that checked baggage was free, and that there was a stuff fee for the use of an overhead bin!

Many begin to get crabby.  Pity the gate agents and flight attendants. I make it my practice to smile and greet these airline employees with a cheerful  "Good morning/afternoon" etc.

Pity the flight attendants.  My ATL-SRQ crew had started their day at 3:00 a.m.  for a Phoenix to Atlanta flight, then after a rest break they were flying to Sarasota, then immediately turning around for a flight back to Atlanta.  Remember that their work begins long before the plane boards. Remember that they are on their feet for the entire flight (except for take off and landing).

Once in Boston I picked up a rental car.  The trip to South Yarmouth went smoothly enough  (with a break in Plymouth to get and eat a sandwich).

Returning to the airport was less happy.  Traffic on I-93 north for the eleven miles from Quincy to Boston was bumper to bumper. It always is!  (I had anticipated this so had allowed more than enough time for the journey).

The flights home were fine  (I had a bulkhead seat from ATL - SRQ).    On arrival at SRQ my patience quotient was almost exhausted.   The friend who had promised to meet me didn't show up, nor was he answering his 'phone.  He had my door key.

The driver "suggested" that he should give me $10 in change, essentially giving him a $7 tip.   I was too tired to protest.

Fortunately a neighbour has a key to my home, so I entered to a display of irrational exuberance from Penne!  (My dog sitter said that she had been well behaved but morose during my absence).

We walked off her exuberance, then I fed her and the cat. Their tension disappeared, but mine stayed with me until I drifted off to sleep.

I was in South Yarmouth to preach at a celebration of ministries for my dear friend the Revd Andrea (Andi) S. Taylor who was until recently the Associate Rector at St. Boniface Church here in SRQ. It was a gorgeous and spirited celebration, and it is clear that Andi is already deeply loved.  My sermon was well received - the nicest comment after service was that I preach with joy. (I'll publish it tomorrow)

All that apart it was so wonderful to be with Andi and Jonathan.  We had time enough to enjoy a good and relaxed dinner on Tuesday, with the usual lively conversation. 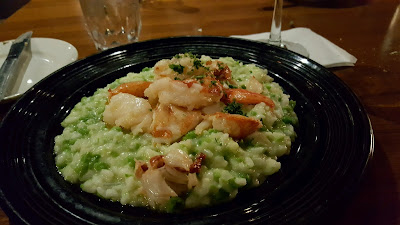 Drool over this delicious Risotto with peas and Lobsta!

As well as the joy of being with Jonathan and Andi, I was blessed to see "Bibs"(Alan) and Shirley Taylor I've known them for almost forty years; with Nelson Wirtz (at whose wedding to Meredith I officiated in 2005); and with Bishop Alan Gates; Alan and I knew each other when we served congregations in Western Mass in the 1990's.

He is now my Bishop - even though I live and serve in Florida I am what we call "canonically resident" in the Diocese of Massachusetts.  We had a good catching up time after the service. 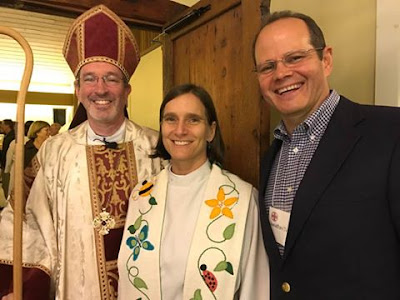