More from Saigon (and my "not the best morning")

All Vietnam was getting ready for Tet, the Lunar New Year holiday.  That helped to explain the heavier than usual traffic, and the abundance of flowers, especially peach trees (being carried on the back of scooters etc!).

A prized Tet gift for one’s folks is a 24 pack of “Coke”.  Coke is sold in red cans, and red is considered to be a “lucky colour”.

There was a pre-Tet festival in the lovely park near my HCMC hotel. I wandered in (with the princely sum of $1 for admission) and admired the flowers, the bonsai and the crowds.

A mid morning show had begun on a large stage. The smallish audience was most appreciative.  Of course I could not understand a word, but it seemed to be slapstick, with a lot of “bonking folks on the head” with empty plastic bottles -  a sort of human “Punch and Judy Show”.

The morning of Feb 13th was not my best time.  We drove for 2 1/2 hours out into the countryside to view the Great Cao Dai Temple.

My tour guide was a non-stop talker (it takes one to know one), but there was very little of interest en route.

She was the tour guide who in the space of two hours as we passed through three towns pointed out the ‘bus station in each place!

Cai Dai is a syncretistic religion with its headquarters in Tay Ninh (where we were headed).  It claims that all religions are true, but that God founded Cao Dai in 1926 because the traditional religions (Buddhism, Hinduism, the teaching of Confucius, Christianity, Judaism , Islam) had become corrupted.

It teaches non-violence, vegetarianism, veneration of ancestors, and prayer.

It is hierarchical and has (yes it uses these terms) – a Pope, Cardinals, Bishops, and Priests.  It has monks and nuns. (Many of the nuns are elderly widows).

Jesus is regarded as a Buddha, and St. Joan of Arc is especially venerated.  (Do remember that the French colonised “Indo-China and that Catholicism was relatively strong in southern Vietnam).

We were supposed to witness what was called a “Mass”, but it had been cancelled because of the Tet holiday. So, although the Temple held a certain interest for me, I would very much liked to have witnesses the “Mass”. 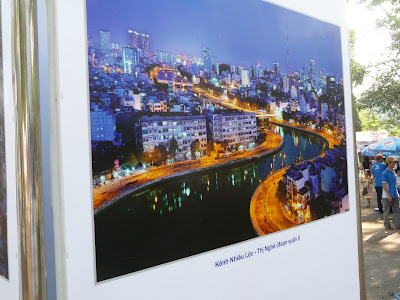 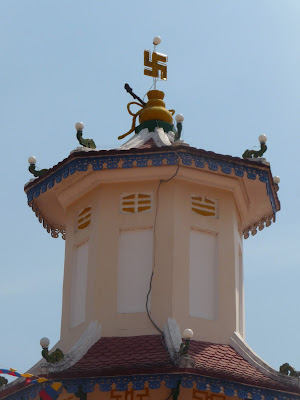