Visiting Uncle Ho and other matters 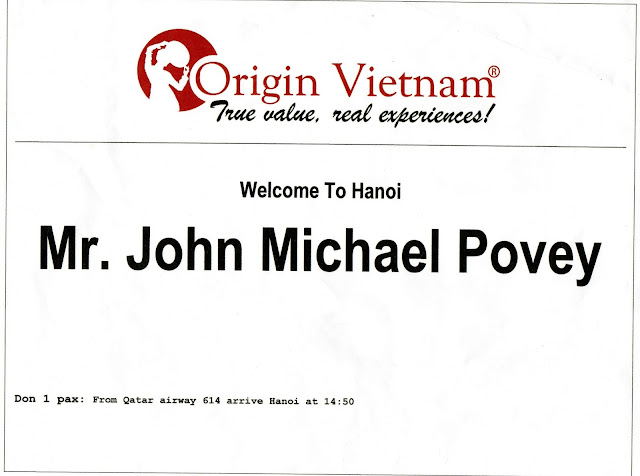 Whenever I got to a new place by plane or train "someone" would be there to greet me with a sign This one was on my very first day  when I arrived at the Hanoi Airport. It was good to see!


Early on the morning of 3rd February my train lurched into Hanoi’s main station after the return journey from Lao Cai.

I ran the gauntlet of taxi drivers (cars or motor bikes) and ignored them as I’d been given clear instructions and directions about the three minute walk to the hotel where I would rest, get a shower and eat breakfast.

It was 5:00 a.m. and already the streets were busy. Outside the Hotel door a man was squatting and sharpening knives.

It was not the finest hotel, but I got a rest and had an “o.k.” breakfast.

Mr Ruby showed up with the driver, and off we went to the Ho Chi Minh’s Mausoleum.  It is at the spot that Ho Chi Minh read the Vietnamese “Declaration of Independence” on Sep 2nd 1945.

Whatever we in the west think or thought of Ho Chi Minh is revered by Vietnamese people as the “father of the nation”, in much the same way as American’s revere George Washington.

Minh’s vision was to free his country from feudalism and colonialism, and he believed that communism would be the best route to freedom.

His body is embalmed “Lenin style”, and I filed passed it with many others.  We were not allowed to talk, stop walking, or take photographs.  It was distinctly odd to see the body of this man who had been feared, hated, and reviled in the west.

The Mausoleum is set in a beautiful park alongside the botanical garden. We also saw Ho’s two houses in which he led an un-ostentatious life.  He never sought wealth or possessions. It was only at the insistence of party members that a second house was built -  a place to be more secure during the air raids.

We moved on to visit the Temple of Literature which dates to the 12th Century (A.D.).  It was created to teach the tenets of Confucius to the King and Royal Family, and is thought of as Vietnam’s first University.

(Incidentally, Confucianism is NOT a religion.  It is a “teaching” on how to live an orderly and balanced life. In the Temple of Literature there is eastern traditional religious symbolism, but it was a place of learning, not of worship.)

After lunch Mr Ruby took me to the History Museum.  It was not over exciting - once you’ve seen Stone Age tools, whether in Bristol, London or New York City it’s hard to be impressed with them in Vietnam.

On this final day in Hanoi I had one more “site” – the incredible Water Puppet show.  It was remarkable and beautiful. The puppets flew, danced, swam and engaged in battles”

I could not for the life of me figure out how they were operated.  Then at the end of the show the puppeteers emerged.  They had been behind a curtain, waist deep in water, and had manipulated the puppets by wires which were attached to long underwater poles. Remarkable!.

“Modern water puppetry is performed in a pool of water 4 meters square with the water surface being the stage. stage has been constructed.

Up to 8 puppeteers stand behind a split-bamboo screen, decorated to resemble a temple facade, and control the puppets using long bamboo rods and string mechanism hidden beneath the water surface. The puppets are carved out of wood and often weigh up to 15 kg.

The puppets enter from either side of the stage, or emerge from the murky depths of the water.
Spotlights and colorful flags adorn the stage and create a festive atmosphere.” ( Quotation from Wikipedia)

It was Sunday, so I chose to go to the airport early so that Mr. Ruby and my driver could spend time with their families. ‘Twas a fine sentiment, except that my flight to Da Nang was delayed two hours, this I was “hanging around” for five hours in the terminal, and my lap top had a flat battery. Not good! 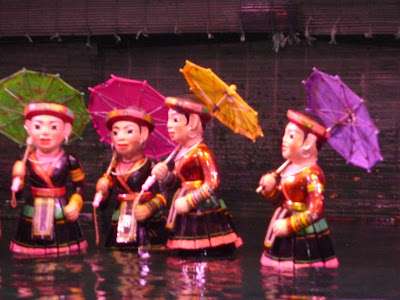