March 03, 2013
I have looked at the photo’s of ex-Pope Benedict leaving the Vatican to fly to Castel Gandalfo by helicopter.

It’s but a 15 mile journey  by road (indeed in 1974 I took a ‘bus from Rome to Castel Gandolfo for a public audience with Pope Paul VI).

At first blush it reminded me of failure.  I saw Richard Nixon leaving the White House by helicopter. I was reminded of the fall of the Saigon regime in Vietnam (1975) and the frenetic evacuations by helicopter.

At second blush it made me think that even Pope Benedict had to leave office in a dramatic and powerful way. Why should I think otherwise?   The Papacy is by its very nature rooted in theories of authority and power.  A former Pope could not possibly leave Rome on the back of a donkey.  That would be too much like Jesus of Nazareth!

The Pope aside, many of we clerics assert that we have power and authority to rule over congregations.

“’Snot true”: the authority of the ordained is to serve.

When I insisted on “authority” I made a pig’s ear of my ministry.

When I chose (or was forced to choose) the way of service, one or two or more people were drawn closer to the Lord Jesus.

At my best as a Pastor I rode on a donkey.  At my worst I wanted a helicopter. 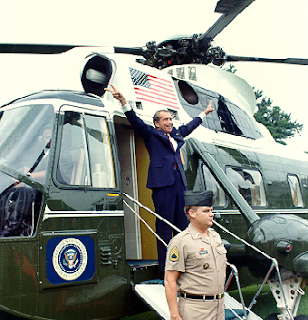 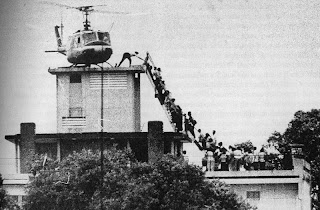