Readers in countries other than the United States may not be familiar with one of the origins of the American celebration of Mother’s Day, (not to be confused with Mothering Sunday).

Around 1870, (soon after the end of the Civil War) Julia Ward Howe called for a Mother's Day to be celebrated each year to encourage pacifism and disarmament amongst women. It continued to be held in Boston for about ten years under her sponsorship, but died out after that.

Peace was at the heart of that early observance of Mother’s Day.

Thus it was that in Boston “The Mother’s Day Walk for Peace” began in 1996 for families who had lost children to violence; over the years, it has become a way for the wider community to show a commitment to peace and financially support the work of the Louis D. Brown Peace Institute.

According to Boston.Com thousands of folks participated in the walk this year.

Among them were some 650 Episcopalians, walking  in part to honour the memory of  Jorge Fuentes a nineteen year old member of St. Stephen’s Episcopal Church (Boston) who was gunned down in September 2012, and in part to work against violence in the City.

Some of my friends were part of the Boston walk today 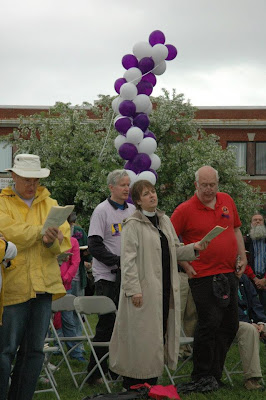 For information about another “root” of Mother’s Day by Ann Reeves Jarvis, and especially by her daughter Ann see:

http://www.wvculture.org/history/jarvis.html
Posted by J. Michael Povey at Sunday, May 12, 2013