Goofing off from Church today and Bertha Honore Palmer. 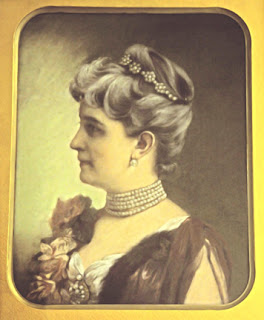 Last Sunday (17th July 2016)  I took my accustomed pew at for the 8:00 a.m. Eucharist at St. Boniface Church, Siesta Key.  My regular pew-mate Gray Davis was absent, so I felt very alone.

The guest preacher is a good man, but half his sermon was lost on me, due to his habit of dropping his voice at the end of sentences.

Then we heard a presentation about our budget deficit ($85,000) and the need to raise more money. I have been making and hearing such presentations for more than thirty years (what goes around comes around!).

I like and respect the man who made the presentation, but my mind and heart were elsewhere so I quietly slipped out of Church at "half-time".

All those words  (sermon and presentation) were more than I could stomach. I longed for some silence for prayer, meditation and contemplation.

That longing for silence in worship is not unique to me.  Episcopal Church liturgies are "busy, busy, busy" (and the same is true of most denominations).

It's not the fault of St. Boniface Church, it's just that on 17th July my heart and mind were closed to all those words.

(I plead for silence to become an important part of all  Church services).

With that in mind I decided to skip Church today.

But I needed a new adventure to take my mind off myself.   I decided to drive the entire length of Honore Ave in Manatee and Sarasota Counties.  Penne came with me.

In recent years it has been extended north-west into Manatee County (at Lockwood Ridge Road), and south into Sarasota County (at Laurel Road, Venice), a distance of about 22/23 miles.

(I watched the growth of  this southern extension of  Honore , almost parallel to I-75,  in my many visits to my now deceased neighbour Edythe Thomas in a Nursing Home off Jacaranda Blvd.)

It's a mixed bag.   At the north west end it travels through some underdeveloped agricultural and wet lands.

At the south end after passing through Palmer Ranch (a  huge series of "communities") we find the same.

In between there are various developments  -  large areas of new housing.with a number of things in common.

1.  Each are at  some distance from shops, corner stores, gas stations, churches, banks,  and post offices etc.  In other words, there is no "there" there.

2,  Each is unaccessible via public transportation.

3. Each seems to be a self contained locality, with next to no connection with the community as a whole.

THUS the social glue is broken.

At the end of our southern drive (at Jacaranda Blvd.) Penne and I stopped at a McDonald's. Penne was so excited to explore new territory, and mark it with her pee, I wanted to get a cup of Coffee,

Inside the store I was faced with the newest Mc.D's feature: a booth at which I could order and pay for my coffee using a touch screen and a credit card.

I, with many others, disdained the impersonal booth in favour of ordering at the counter.  It was a good choice.  I placed my wee order with a young man whose name is Watkins.

From start to end he could not keep from smiling.

That's community.  In think that Bertha would have approved.