"The Defenestration of Prague" - surely you remember this from High School/College History Courses. 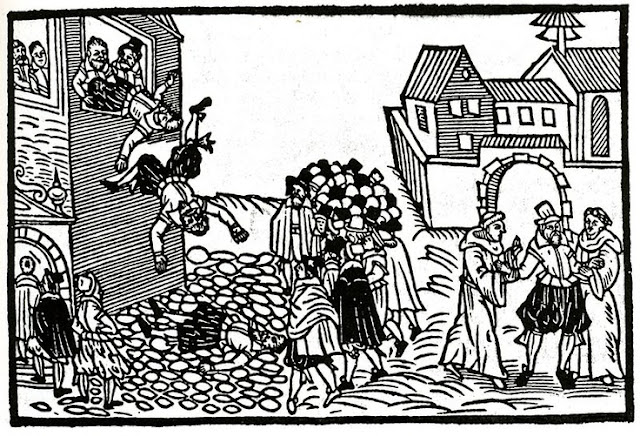 I am reading  terrific book by Professor A.C. Grayling of the New College of the Humanities in London U.K.

The book is "The Age Of Genius * The Seventeenth Century & The Birth of The Modern Mind" (Bloomsbury, London, 2016).

It should be required reading for every politician, priest, pundit and pastor!

It could be read alongside:
"The Invention of Nature: Alexander von Humboldt's New World"

Both books challenge we of Western European ancestry  to revisit and readjust our sense of who we are, and who we have became  in the light of the 17th and 18th Centuries,

A.C. Grayling's book is especially  masterful. It posits that modern (as opposed to magical)  thinking emerged in Western Europe, even in the midst of the dreadful and religious  "Thirty Years War".

Even as my christian and religious mind is rightly and deeply challenged by Grayling, I can also be amused by one of the precusors to the Thirty Years War, i.e. the "The Defenestration of Prague" 1618.

The Emperor Ferdinand II had ordered that all Protestant Churches in Bohemia had to return to Catholic control,  That was not to the liking of Protestants.

In 1618 when two of the Emperor's Regents came to Prague to enforce the ruling they were seized  by the "defensors" of Prague and thrown out of a window in  Prague Castle - thus the "The Defenestration of Prague".

They landed on a rubbish pile more or less uninjured, suffering (as Grayling says,"injuries more to their dignity than to their limbs",)

In a delicious aside  Grayling notes that subsequent Catholic propaganda asserted that angels, or the Virgin Mary had caught their  fall mid-flight and guided their fall to the rubbish dump. Surely the Angels or the Virgin could have lowered these hapless Regents to a sweeter spot!).

I like the book for many reasons  -  it has to do with far more that the Thirty Years War, It is stretching mm mind.