Hot and a bit bothered

I noticed yesterday that my shower water ..was tepid, even though I had turned on the water heater.

I turned it on again today, but still could not draw warm or hot water

Of course the breaker had flipped, but I could not reset it.   A call to a local business "Mr Sparky" led to a staff member being in my home within the hour.

The truth is that the entire breaker box is "shot" -  indeed some of the plastic components showed signs of melting.  Could have led to a fire eh?  It's a vintage box

So the entire box is being replaced, together with an outside box/   While they are at it the electricians are also installing three "wired"  smoke detectors  (about time you might say).

It's been a bit steamy in my home.  The work is being impeded by a huge thunderstorm, so there is now natural light  (one of them is wearing my "headlight" which I had bought for power off emergencies).

Just yesterday I had opened and tested my "emergency box"  which includes candles, flashlights, a lantern and a Coleman camping stove. So I have been able to cook!

'tis an inconvenience, but a minor one.  (I have reminded myself that I could be living in Aleppo or some other city which is being bombed to rubble 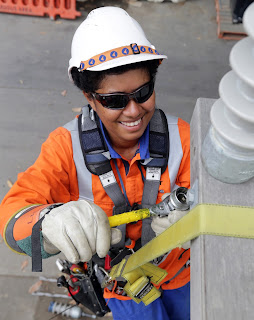