I hate to waste food - but there are perils.

March 01, 2016
On Monday 29th Feb I decided to use some leftover food for my breakfast.

I had a bit of uncooked spinach, and a half of an already baked sweet potato, which I did not wish to waste

I sautéed the spinach and sweet potato in a bit of Olive oil, and thus has a "waste not, want not breakfast". It was good.

I tried the same trick again today, Tuesday  1st.March. This time my plan was to use up a bit of left-over spinach salad, supplemented with a hard-boiled egg.  "Waste not, want not".

I took the spinach salad in its glass bowl from my fridge, and placed it on top of the oven. (So foolish!!)

I put some water in a saucepan to boil the egg.
les
I turned on my oven burner to cook the egg.

Sad to say I had made a grave mistake.

For I had  turned on the wrong burner.

Instead of boiling an egg I had heated the glass bowl which contained the remnants of salad.

Said glass bowl exploded from the intense heat - scattering shards of glass and bits of salad all over the kitchen.  DREADFUL!

I should have been more careful or attentive!

It took me half and hour to clean up the mess.  I know that wee bits of glass will emerge from "wherever" in the coming weeks.

BUT it could have been worse. Not a single shard of glass exploded into my body.

AS IF THAT WERE NOT ENOUGH  I managed to knock a glass tumbler to the floor at the home of my friend Ben later in the the day.

Once again my carelessness resulted in the "scattering of glass shards".

It's been a "glass-astrophic day",

Here's a nice wee photo' which I took from my screened in porch just before sunset today. 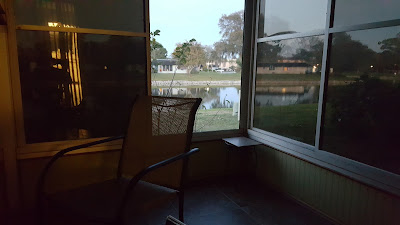