Les Skuse: who the heck is Les Skuse?

I am binging on the novels of John Irving. My current fix is on his 2005 novel "Until I find you".

( I sometimes think that Irving's novels have but one plot. but each with fascinating characters!).


"Until I find you". have to do with the four year old Jack Burns, and his mother Alice who is a Tattooist.

In an early chapter which is titled "Saved by the Littlest Soldier", John Irving writes "Nevertheless, Tattoo Ole's only comment was that the legendary Les Skuse in Bristol would have been envious of Jack's needlework".

This reference to Les Skuse jolted my memory. I had not thought about Skuse in ages. I had no reason to so do!  Then his name pops up in a novel  John Irving clearly does not skimp on his research.

Les Skuse is (was)  a real person. He had a Tattoo Parlour on Mina Rd in my home City of Bristol, long before getting tatts was popular.

His name and business were household words throughout Bristol.He was a nationally famous artist who was a hero  for soldiers. sailors, and bikers etc.

He was a suspicious character  for  respectable Bristolians who had no truck with tatts, and thought them to be a bit "lower class". 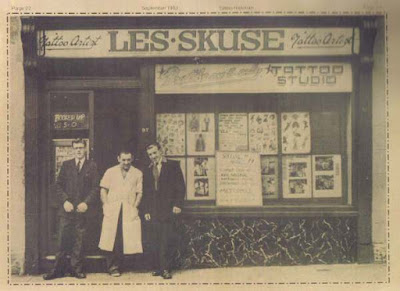