This gorgeous article is by Kristen Sundberg Lunstrom,  as published on Image Journal. Org. The article came to me via my colleague Bruce Lomas. THANK YOU BRUCE.  I love Cather's novel so much, and Kirsten Sundberg Lunstrom's  article has helped me to love, appreciate,  and understand it even more. As the Puritans might have said "It speaks to my soul".

The following is  by Kirsten Sundberg Lunstrom,

For years I read the same novel every spring—Willa Cather’s My Antonia. I was first assigned this novel as a classroom text when I was in the ninth grade, and I recall reading it with the fervor the defining books of one’s life always inspire. The simultaneous wide, raw beauty and harsh living conditions of Cather’s prairie made a kind of literal and spiritual sense to me. My family had spent a year in Nebraska when I was a child—my father serving as an intern pastor at the Lutheran Student Center of the campus of the University of Nebraska. We moved to Lincoln in August and took up residence in a Sears & Roebuck house that had a robin’s egg blue porch ceiling, old fashioned transom windows over the bedroom doors for ventilation during the sweltering summers and frigid winters, and a basement that smelled of stale water and dark dirt. The house (like us) had been moved from its original location, and sat on a plot of untended grass in a “transitional” neighborhood on the fringe of the city. The railroad was close enough that the house shook each time the train passed, and on spring nights it was possible to see a storm cloud rolling across the fields like a pewter-colored sheet of heavy velvet suspended from the sky.
I was incredibly lonely that year, and the house itself—as well as the landscape of Nebraska—spoke that loneliness. The endless horizon of the prairie felt obliterating, terrifying. How wide the earth was! How bleak! At night, in my bed, I lay looking up through the skylight in my ceiling, fixing my eyes on the constellations. I couldn’t have articulated this then, but looking back on that year now, as an adult, I see that what I wanted from the night sky was what the prairie (and my family’s move there) had stripped from me—an anchor. An anchor to myself and to the world. A fixed point to keep me tethered to my own body, to the present, and to a sense that anything had meaning. 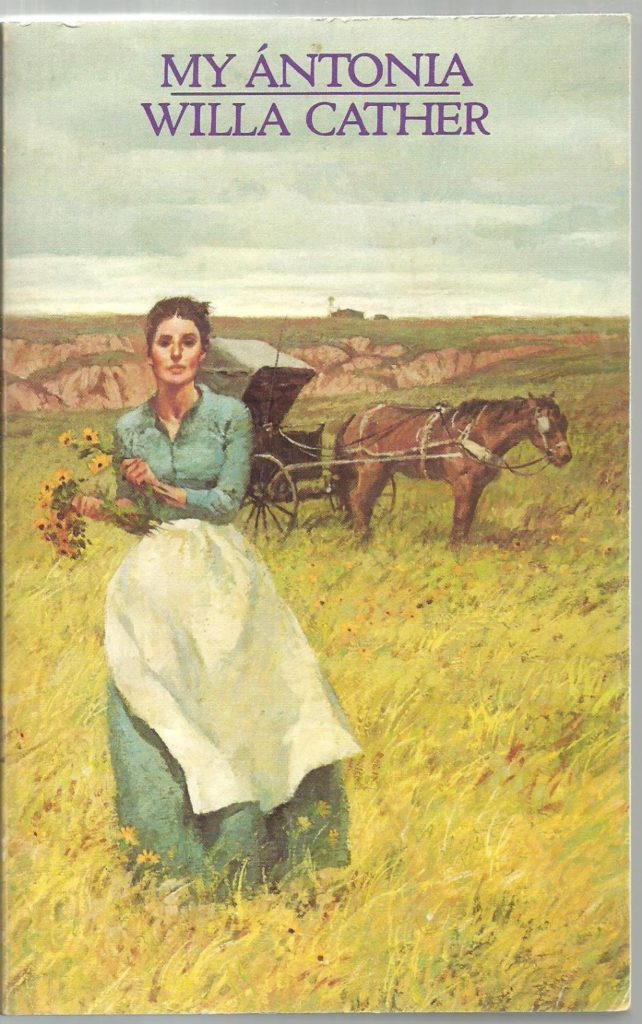 Later, reading My Antonia from another home (this one on the far west coast of the country, in a landscape just as beautiful and raw, but abundant rather than spare), I recognized in Cather’s prose what I had felt during that year in Nebraska.
She writes:

There seemed to be nothing to see; no fences, no creeks or tree, no hills or fields. If there was a road, I could not make it out in the faint starlight. There was nothing but land: not a country at all, but the material out of which countries are made. […] I had the feeling the world was left behind, that we had got over the edge of it, and were outside man’s jurisdiction. I had never before look up at the sky when there was not a familiar mountain ridge against it. But this was the complete dome of heaven, all there was of it. […] Between that earth and that sky I felt erased, blotted out. I did not say my prayers that night: here, I felt, what would be would be.

There’s beauty in the erasure, Cather points out. There’s a gift of freedom in recognizing one’s smallness against the breadth of the larger world—under “the complete dome of heaven.” While her narrator, Jim, doesn’t say his prayers, it doesn’t seem to me that he’s turning away from or rejecting the divine; rather, he is witnessing the mystery of the divine as so much bigger than he’d previously understood it to be, and—in awe—he’s submitting to it. He (like all of the pioneer characters who populate this novel) recognizes that one must carry on despite the terror, the insufficiency, the smallness of being human; that there’s grace, in fact, in accepting the need to simply carry on.
Posted by J. Michael Povey at Tuesday, October 15, 2019