I was in my local supermarket yesterday when I overheard a clerk/cashier say to a customer "have an awesome day".

I was glad not to be in that line, for I would have been tempted to say "thanks all the same, but I can only absorb two, or maybe three awesome days each year".

That response, realistic or cynical,  (you decide which), would have arisen from my sense of a truly awesome human being Alexander Van Humboldt 1769-1859. 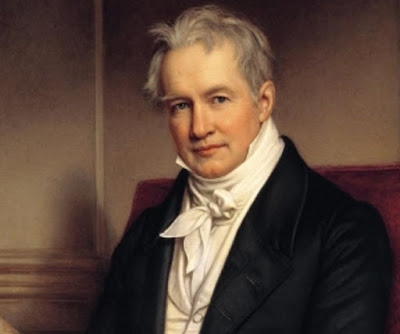 Van Humboldt was a naturalist, a botanist,an explorer, a painter, a scientist, an observer of the natural world, and a man of letters (and that's just to scratch the surface!). The case can be made that he was the first modern environmentalist.   He was acquainted with the great and the good - Goethe, Schiller, Darwin, Brunel, President Jefferson, Simon Bolivar etc (to name but a few).

I am learning about Von Humboldt in what I believe to be a superb book "The Invention of Nature - Alexander Van Humboldt's New World" by Andrea Wulf (Alfred A Knopf 2015).

Andrea Wulf distills a veritable treasure trove of historical and archival material about Von Humboldt into prose which is elegant and eminently readable.

It is a terrific read.  Indeed I would say a must read for those who believe that history, science, and the environment etc  have far more important things to say than the sound bites emanating from the would be Presidential candidates in the U.S.A. , and the Brexit and Stay-In carnival barkers as they talk about the U.K. referendum regarding membership in the European Community.

2,  The draining of and building upon wetlands and marshes, or their transformation into agricultural land.

3.  The ghastly consequences when local farming, which had hitherto provided abundant supplies of food, was exchanged for cash crops  (sugar, cotton etc) -  meaning that self-sufficient communities had to import expensive foods from other places.

4.  The evil of colonialism (particularly in South America) where indigenous peoples were enslaved to mine silver and gold for the Bourbon Monarchy in Spain.  Between 1799 and 1804 Van Humboldt undertook an epic exploration of South America (modern day Venezuela, Chile, and Peru) and North America (Mexico and the U.S.A.) where he saw for himself the dehumanizing and cruel results of slavery.

Von Humboldt was a man of science, of observation, of knowledge, and of "prophetic" insight into the potential environmental dangers to our planet,

They are no longer "potential" dangers,   They are real dangers.  We, blind to science, deaf to the siren cries of danger, concerned only for ourselves and not for the generations yet to come, and capable only of hearing the shitty sound bites of pundits and politicians have decided that our short term gain is of more importance than Earth's long term gain.