A wonderful book for gardeners, environmentalists, and students of American history.

I have just read a superb book:  "Founding Gardeners" by Andrea Wulf.  It is a must read for gardeners, environmentalists and students of American History. 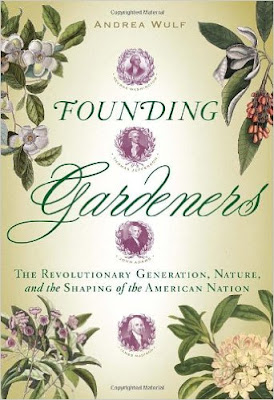 Here is the blurb from the dust jacket:


From the author of the acclaimed The Brother Gardeners, a fascinating look at the founding fathers from the unique and intimate perspective of their lives as gardeners, plantsmen, and farmers.For the founding fathers, gardening, agriculture, and botany were elemental passions, as deeply ingrained in their characters as their belief in liberty for the nation they were creating. Andrea Wulf reveals for the first time this aspect of the revolutionary generation. She describes how, even as British ships gathered off Staten Island, George Washington wrote his estate manager about the garden at Mount Vernon; how a tour of English gardens renewed Thomas Jefferson’s and John Adams’s faith in their fledgling nation; how a trip to the great botanist John Bartram’s garden helped the delegates of the Constitutional Congress break their deadlock; and why James Madison is the forgotten father of American environmentalism. These and other stories reveal a guiding but previously overlooked ideology of the American Revolution.
Founding Gardeners adds depth and nuance to our understanding of the American experiment and provides us with a portrait of the founding fathers as they’ve never before been seen.

And here is a review from the New York Times

"In 1961, when John F. Kennedy asked Rachel Lambert Mellon to design the Rose Garden at the White House, the commission established a strong link with America’s botanical past. And so, much more recently, has Michelle Obama’s organic vegetable garden, elsewhere on the grounds. As Andrea Wulf reminds us in her illuminating and engrossing new book, “Founding Gardeners,” the first four presidents were passionate botanists whose country seats became laboratories for their grander vision of an independent agrarian republic in the New World.
Perhaps projecting an underlying message to our present leadership, Wulf has written an ecological and historical narrative, revisionist in the best sense, combining the suspense of war and political debate with an intimate view of private lives devoted to the natural sciences and reinforced by long-distance friendships. “Seed boxes” appear to have been the currency of those friendships, exchanged in an international network that defied official hostilities.
Wulf, a British design historian, traveled to America and practically lived at the founders’ country houses, reading their correspondence about their gardens and their hopes for a country of farmers in the tradition of Virgil’s “Georgics.” The reader relives the first decades of the Republic not only through her eloquent and revelatory prose but through the words of the statesmen themselves, written mostly in private. We see, for example, George Washington briefly leaving his generals, just before the British invasion of New York, so he can compose a letter to his estate manager about planting groves of flowering trees at Mount Vernon. Except for one short visit, he would not be home for eight years.
Wulf begins with Benjamin Franklin, in London on behalf of the Pennsylvania Assembly at the time of the much reviled Stamp Act. Even as catastrophe loomed, he was urgently sending seeds back home to his wife, not just for the enhancement of his own garden but to be distributed to other Philadelphia plantsmen. Agricultural self-sufficiency was, he believed, vital for the increasingly rebellious colonies.
After the Revolutionary War, when Thomas Jefferson, then minister to France, joined John Adams for sluggish trade negotiations in London, they also engaged in the timeless British pleasure of visiting gardens, then dominated by the picturesque landscape movement praised by Alexander Pope, whom both had read. But what they recognized, to their great surprise, at places like Lord Cobham’s famous gardens at Stowe were groves of American trees and shrubs — obtained from the Philadelphia farmer and botanist John Bartram, who had introduced over 200 species to fashionable landowners through his London agents. “The irony,” Wulf notes, “was that the English garden was in fact American.” And as intrepid tourists and revolutionaries, Jefferson and Adams were moved by the classical follies in these English gardens, ornamented with motifs depicting ancient liberty in the face of imperial (or monarchical) tyranny.
According to Wulf, Bartram’s garden on the Schuylkill, overseen after his death in 1777 by his sons John and William, also played a significant role in the Constitutional Convention. At one point, the delegates were deadlocked over the issue of proportional representation in Congress. Farm and garden visits were on the unofficial agenda, so on a cool summer morning a group took carriages from Philadelphia to Bartram’s property, where they were impressed by the splendor of its collection of trees and shrubs from all 13 colonies, “their branches intertwined,” as Wulf puts it, “in a flourishing horticultural union.” This symbolism was not lost on three delegates who changed their votes to “aye,” or on Alexander Hamilton, the proposer of a more urban-centric society and the least interested in botany, who nonetheless planted 13 sweetgum trees at his house in New York, the Grange.
John Adams was the first president to live in what was soon to be called the White House, which was then, like most of Washington, surrounded by mud flats. The city was emerging from Pierre Charles L’Enfant’s grandiose plan in which, harking back to British landscape gardens, wide avenues were terminated with real classical “metaphors of liberty” — the Capitol and the White House. Oddly enough, the next president, Jefferson, did little to cultivate the White House grounds, despite his constant improvements at Monticello. Yet Jefferson’s contribution was on a far grander scale: having doubled the country’s territory with the Louisiana Purchase, he sent his secretary, Meriwether Lewis, along with William Clark, on the expedition to the far West that would begin to study the natural history of the American wilderness.
Throughout her narrative, Wulf squarely faces the institution of slavery, which made fertile and exemplary estates possible in the South. In one passage, she describes in detail the way an arboretum was transplanted from the surrounding woodland by Washington’s slaves in the midst of a freezing winter.
After James Madison’s term as president, he retired to his Virginia estate, Montpelier, and devoted himself to the preservation of the environment by conserving timber resources and once-­fertile land that had been depleted from overuse. In 1818, as the first president of the Agricultural Society of Albemarle, he made a prescient speech on the subject, filled with advice for living off the land without destroying it. His garden, like those of others laid out by the founding fathers, remains today as proof of his dedication to the natural world. In many ways, these gardens are among the greatest aspects of our heritage."

The Revolutionary Generation, Nature, and the Shaping of the American Nation