I sang to a fabulous Russian man I met today. 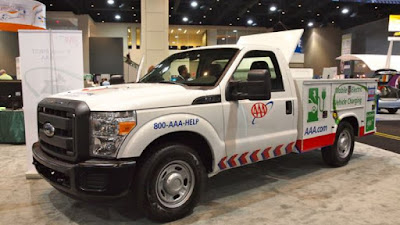 
Off I went this morning to my local Publix Supermarket  to get some more supplies for my 10th anniversary in SRQ party (by the way the party was great fun!).

I was in and out of the store in ten or twelve minutes but, "woe is me"  my car would not start,

I have a jumper cables, so I asked a man (I call him "man number one") who was returning to his car if he would help me.

He said that he was in a bit of a hurry, but that he would be glad to help.

Just then I caught sight of one of my local acquaintances (Dan), "man number two"  who had also been shopping at Publix.

I told the first man that I could cope without his help (and thank you very much!) because Dan was nearby,

Of course Dan was glad to offer his help, but man number one did not rush away for he wanted to make sure that I had gotten a charge,

Dan and I hooked up my jumper cables, but all to no avail.

Then "man number three" drove by in his huge Ford  F150 truck,  He saw my dilemma, but without my asking, he offered his help, thinking  that his truck might have a bit more energy to spare.

'Twas a good idea, but it did not work.

(Here I express gratitude  to man number one and man number three who then went on their merry ways.)

Man number two (My local acquaintance Dan)  drove me home and then back again to the Publix parking lot because  I had left my mobile 'phone at home.

Please be gracious to me, even though there is no point in owning a mobile 'phone then not carrying it on one's person. Mea culpa.

I called AAA.  As is always the case I was interrogated mercilessly(!)  until the AAA  clerk  conceded with "yes, you do have a problem".

I returned to the parking lot whereupon  the local AAA office called to say that I should expect service in thirty five minutes. A few minutes later the repair truck driver called to let me know he was on his way.

Even as I waited with the card hood up, two other drivers stopped and asked if they could be of help.

"He" was Alex. I heard his accented English so I asked "what part of Europe are you from?"
"From Russia" he said.

Alex set to work with great diligence. In about fifteen minutes he determined that the car battery was as dead as the Monty Python parrot.  It had been installed by Triple A just seventeen months ago as a replacement for another AAA battery which had also  failed under warranty.

The receipt for that transaction was wonderfully stored in my filing cabinet -  wisdom would have told me to store it in the glove compartment.  Anyway, dear old Alex made a long call to an AAA office as a result of which I was granted a new battery free of charge, I would think so, a battery should last for longer than seventeen months).

The cool thing was that Alex, instead of charging me for a new battery and then leaving me to "fight City Hall", took the time and trouble to make that call.

Just before he left I said "Alex, I know that you cannot accept a tip, but if I get a survey call about your work I will give you top marks".

I added "before you leave I want to sing you a song".  His facial expression showed both confusion and bemusement.

"Don't worry" I said, "I think that you will know and like this song".

I then launched into a "la la" rendition of the first four line of the old Tsarist days Russian National Anthem.

Alex grinned from ear to ear.  Indeed he knew and liked the tune.

God the Omnipotent! King who ordainest


thunder thy clarion, the lightning thy sword;


show forth thy pity on high where thou reignest:


give to us peace in our time, O Lord.


thy ways all holy, and slighted thy word;


bid not thy wrath in its terrors awaken:
give to us peace in our time, O Lord.


yet to eternity standeth thy word,


falsehood and wrong shall not tarry beside thee:
give to us peace in our time, O Lord.


God the All-provident! earth by thy chastening


yet shall to freedom and truth be restored;


through the thick darkness thy kingdom is hastening:
thou wilt give peace in our time, O Lord.