In my opinion: "Bill Bryson, the London Daily Mail, and me."

The American author Bill Bryson  (now a dual citizen of the U.S.A. and the U.K.) entered the consciousness of many British and American readers upon the 1995 publication of his tender, affectionate and sometimes funny book "Notes From a Small Island". 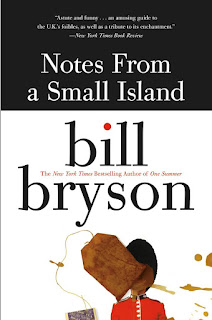 Twenty years on, Mr. Bryson (who has lived in the U.K. for many years),  revisited the Small Island and wrote "The Road to Little Dribbling" (Doubleday 2015). 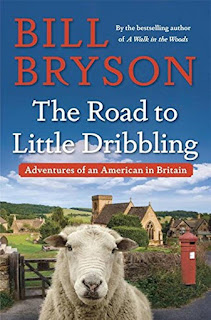 The book was disappointing to me.   I thought it to be  "Notes From a Small Island"  revisited, without the charm of the 1995 book.

I read "The Road to Little Dribbling" without great pleasure.

He revels in the charm of small towns and villages,  BUT......

He visits the small towns and villages as starting or ending places for his extraordinarily wonderful walks, or because they are en route.  He apparently has next to no interest in the people who live in these places -  they are useful to him merely to direct him to a decent pub where he can down a few pints, or for a tea shop or a cafe where he can drink a good cup of tea (and moan about the dry or stale cake which comes with it).

What's the ;point of tourism without any significant encounters with the locals?  In one instance Bryce reports nicely about a conversation he had with locals in a pub in Fishguard, otherwise he majors in comments about grumpy shopkeepers.

He prefers those small towns and cities which have Cathedrals and/or Colleges,;  or are on the coast, i.e. places which have prosperous and well educated residents. (Salcomb, Lytham St. Anne's, Durham etc).

He adores the (mostly English and Welsh) coastlines and inland landscapes, but has nothing to say about rural poverty,  or the deprivations of those who struggle to make a ,living in "quaint seaside towns" , especially off-season.

He treats Scotland as if it were a more or less disposable appendix.

He is utterly dismissive regarding those towns and cities which have been devastated as a a result of the economic and political changes as instituted by the perfectly dreadful U.K. Premier Margaret Thatcher  (e,g, Lowestoft [my mother's birthplace); or  Grimsby, or Barrow-in-Furness, or Milford Haven, or Dover, or Fishguard).

He laments the decline of British industry, but is blind to the decisions of the British oligarchs who at the drop of a hat will move a business from (say) Wolverhampton to (say) Malaysia -  with no loyalty to anything except their personal prosperity.

It's not that I want "The Road to Little Dribbling" to be a political tract.  It is that I wish that  Mr. Bryson would clear his eyes and ears of the tourists'  romantic and unhistorical ideas of "Merrie Olde England".  After all, he has lived in the U.K. for long enough.  He knows better.

When it comes down to it  "The Road to Little Dribbling"  left me the impression that  Mr. Bryson writes like a "Daily Mail reader/Little Britain/ Home Counties Smug/ Romantic Tory".


There is humour at the end of Bryson's pen.

But I  did  laugh when he related the time he was at the Firth of Forth and was hoping that someone would ask if it were his first visit so that he could reply "No, this is my fourth or fifth visit to the Firth of Forth" (was that one-liner original to him?)

Bryson tells of the time he was at a Motorway services area on the M 4 near Bristol.  He thought that he'd be entering a cafeteria style restaurant where he could get a hearty meal.He laments that such Motorway cafeterias have gone the way of the Dodo, to be replaced by Food Courts.

(Let me tell you that the food in those cafeterias was uniformly mediocre and over-priced. We only ate there as a utilitarian last resort.

I was at one of the Food Courts on the M 4 earlier this year.  It was noisy and busy  (what else would one expect - we were alongside the M 4, not next to a gently flowing river eating from  picnic basket).

There were several choices of fast food establishments, and also a mini-mart where one could get a very decent sandwich or some fruit etc for "take out". I was able to get an cup of quite excellent coffee jmp.)

Back to the book.  Having lamented the disappearance of the expected cafeteria, Bryson gets funny again about what he ate.  He says that it was "a biscuit filled with whatever they could find that was foodlike and bright yellow -  I think it was called a Breakfast Crudwich - accompanied by a little bag of Potato Greasies and watery coffee on a paper cup"

Oh go ahead and borrow the book.  It won't harm you.  You'll most likely be utterly entertained since Mr. Bryson is a veritable font of historical trivia.

Note that I have not ranted on my Blog for aeons, and I knew you were all anxious to hear my bloviations one more time.

I met Bill Bryson back in 2005 when I was in London with my friend Joe S.

Joe had secured two tickets for a BBC recording of a programme called "Bookclub", with compere James Naughtie.

Bryson was his guest, and in the pre-recording reception  (wine and cheese courtesy of the Beeb) he proved to be  pleasant, affable, and unassuming.

Naughtie gave us various directions and instructions about the protocols for the recording, and reminded us sternly to turn off our mobile 'phones.

Three minutes into the recording we all heard the ring of a mobile 'phone.  The studio audience and the engineers in the recording booth "lost it"  when we realised that the owner of the "un-turned-off" 'phone was James Naughtie himself.

(Ahem  I asked a question of Bill Bryce in the Q & A part of the programme, and "ahem again" it was included in the edited broadcast.)   You might be able to hear it by following the link below.