Why does the modern Republican Party hate the environment? (and why is the Democratic party so wimpy?)

FIRST  if you are a friend of mine who is a Republican I am not attacking you personally.

SECOND  if you are a friend of mine who is a Republican I wish that you would do your best to move your party away from its radical nihilism, and back to its conservative roots.

THIRD  if you are a friend of mine who favours the Democratic party, don't get smug. (More on this tomorrow!).

For now the fact is that the official Republican party despises the Environmental Protection Agency (EPA), and would abolish it at the drop of a hat.

A TRUMP  Presidency would support that.

Even now, in a Republican dominated national legislature, the EPA  is severely and dangerously underfunded (with the sad compliance of President Obama who caved in and agreed to the notoriously bad "Sequestration" fiscal policy).

I submit that in the interests of National Security, and for the benefit  of generations yet to come we should spend at least as much on environmental protection as we do on military preparedness.

After all, of what use will be our military might if our great grandchildren are not assured of safe drinking water, clean air, and sufficient food, The stakes are that high.

A picture is worth a thousand words.  Here are some which illustrate our present dire circumstances, some of which would been mitigated by a strong, efficient and well funded EPA.

NOW DO YOU UNDERSTAND AND SUPPORT THE STANDING ROCK ACTION AGAINST an OIL PIPELINE THROUGH THEIR SACRED TERRITORY, 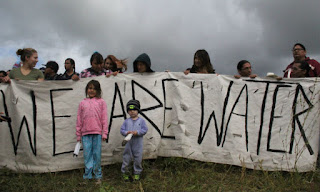 Our Native American mentors and teachers help us to understand that no oil pipe line should trump the vital need for safe (sacred) water.

I trust their wisdom and judgment far more than the temporizing of Republican Party policies which disdain environmental wisdom in favor of  their ideology.

I trust their wisdom and judgment far more than the timidity of Democratic Party policies.